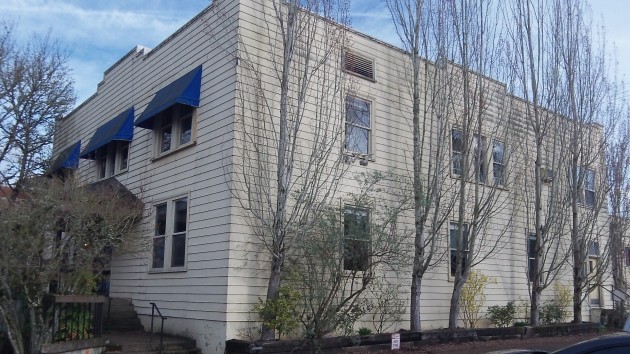 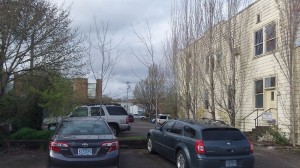 Four townhouses are planned for the lot on the other side of these cars.

Albany’s urban renewal board has approved financial aid for a project to renovate the old Fortmiller Building at 420 Third Ave. S.W. and build four townhouses next door. Members if the Central Albany Revitalization Area board Wednesday had lots of questions for applicant Scott Lepman but eventually endorsed, by voice vote, his request of $336,000 toward a project he estimates will cost more than $1.6 million.

City Councilman Rich Kellum voted no. He had argued for letting banks foreclose on the old building and seeing what happens then. Lepman intends to buy the building, now in foreclosure, before an auction scheduled April 16. (There were one or two other no votes among the 12 board members present, but I couldn’t tell whose they were.)

Lepman and his brother, Spencer, who handles the construction end of their ventures, plan to restore the Fortmiller Building, built in 1930 as a funeral parlor, converted to offices in the 1970s, and lately run down and almost empty. Their plan calls for two offices and nine apartments. And on what now is a narrow parking lot on the building’s west side, they plan to put up four three-story townhouses with offices on the ground floor. It’s the townhouses that represent most of the increase in property value the project would generate.

When some board members appeared dubious, urban renewal director Kate Porsche said this is just the kind of thing urban renewal is meant to support: Not only does it restore an old building that otherwise would likely continue to decay, but it also adds residents and jobs to downtown.

CARA’s investment — a loan that will be forgiven if the project is completed as agreed — likely would pay off in higher property taxes in about 15 years, according to Porsche. The money will come from a $700,000 CARA reserve set aside for public-private partnerships. Lepman gave no timeline for the project but said he’d keep the board posted. 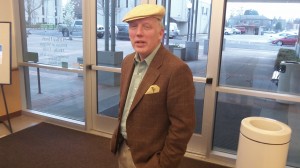 Oscar Hult, who plans to open “The Natty Dresser,” acts the part.

The board also endorsed two smaller requests of $10,000 each in its small-grant program. The grants will go to Oscar and Tamalynne Hult toward opening a men’s wear shop in the Masonic Building on First Avenue (they hope to open “The Natty Dresser” in September) and Seth Fortier toward an exterior remodeling of and addition to Fortier Chiropractic Healthcare on Fifth. A request for $7,760 to help pay for new awnings at Two Rivers Market was postponed until the application is made complete. The board’s actions are subject to final approval by the city council acting as the Albany urban renewal agency.

Tom Cordier, the citizen activist, objected to the way the Lepman project was handled. Without it being on the agenda at the last meeting, on March 4, it came before the board then as a preliminary request to see if CARA would even consider it on the 19th. The board said yes and the Lepmans prepared the formal request. (hh)