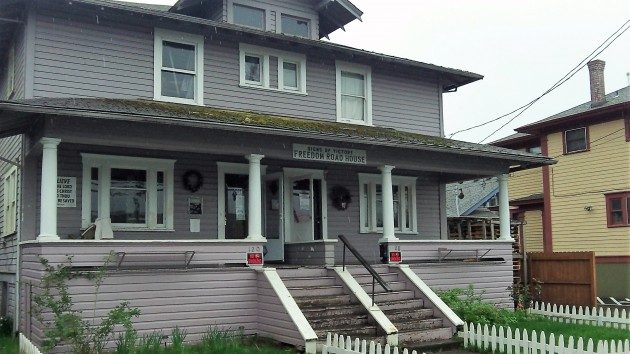 The Signs of Victory shelter on Seventh Avenue, which the mission wants to leave, last March.

Albany officials say the Signs of Victory Mission as been a big help in dealing with the community’s homeless. In return, the CARA urban renewal board Wednesday endorsed a $100,000 low-interest loan to help the mission finish a new homeless shelter across Jackson Street from the Linn County Jail and Sheriff’s Office.

The  CARA loan is intended to help the mission pay for installing sprinklers and do other work needed to make 1100 Jackson Street ready to house otherwise homeless people overnight. Once the work is accomplished, the mission can shift its shelter there from the historic house at 118/120 Seventh Ave. S.E., where it has been for about 10 years or so.

Details of the loan are yet to be worked out. They include the interest rate (2 or 3 percent was mentioned) and exactly what work would be done and how soon. The mission plans to repay the loan from the proceeds of its Christmas tree sales.

City Manager Wes Hare, appearing before the CARA board, strongly endorsed the loan request by George R. Matland, who with his sister, Gale Armstrong-Cabrera, has run the mission since their mother’s death in 2006.

Last March, the CARA board tentatively approved a different kind of deal to help get the Jackson Street shelter established. It called for the city to buy the Seventh Avenue house and then sell it to be renovated. That transaction didn’t happen because of various complications.

Under the new deal, the mission says it will complete the Jackson Street work, move its shelter there and then try to sell the Seventh Avenue house, a duplex.

One reason why the police and other city officials like the mission, besides its other good works, is that it does not turn away people who have had too much to drink. This has proved helpful to the police when they need a place to take a homeless person to sleep it off. (hh)