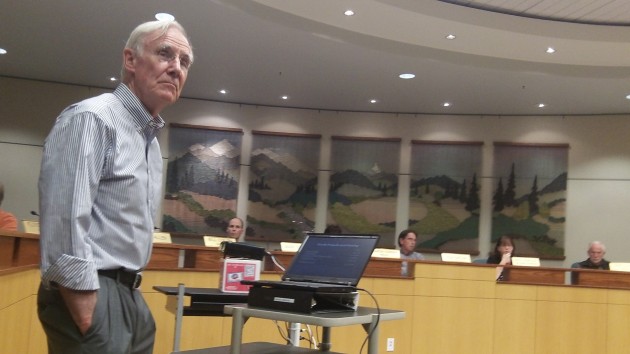 George Crandall listens to someone in the audience Wednesday.

Consultants on Wednesday showered Albany’s urban renewal board with ideas for millions of dollars in downtown street enhancements, but they recommended against angled parking on Second Avenue.

From more than a dozen potential street projects recommended by architects George Crandall and Don Arambula, the advisory board of the Central Albany Revitalization Area picked a handful for further consideration: Second and Third avenues from Broadalbin to Ellsworth Street, Lyon and Ellsworth streets from the bridges to the overpass, and one block of Broadalbin between Second and Third.

Estimated cost of a full treatment for those — new sidewalks and street surfaces, lights, benches, trees, various banners and all the rest — was about $6.9 million. But the board can choose among all the possible enhancements recommended for each, picking some and dropping others, so a cost estimate of the priorities picked Wednesday is pointless. The ideas will come back to the board for more discussion and decisions about the details. The board’s next meeting is Nov. 12.

Crandall and Arambula prepared the package of possible streetscape improvements under a $36,900 CARA contract.

Kate Porsche, the city’s economic development director and CARA’s administrator, said the urban renewal district plans to borrow the money for any streetscape improvements by issuing bonds, paying off the bonds over time with revenue from increases in property tax revenue within the district.

Matilda Novak of Novak’s Hungarian Restaurant and other downtown business owners pleaded with the board that what they needed more than anything was convenient parking. Novak pushed back against the consultants’ recommendation on no diagonal spaces on Second. But they said angled parking would eliminate one of the two driving lanes and the bike lane on Second and yield only four additional spaces while making traffic circulation downtown worse.

If and when any of the street improvements discussed Wednesday will actually get done, nobody knows. Chances are there will be some backlash against any plan to spend millions on downtown sidewalks and things like period lighting. The city council and CARA took a good deal of heat a few years ago over a project to redo one block of Broadalbin Street.

“I don’t even want to hear the word Broadalbin,” Councilman Rich Kellum said Wednesday as he argued for making Lyon and Ellsworth the top and maybe only priorities. But whether ODOT will let the city make any streetscape changes on those legs of Highway 20 is unknown. (hh) 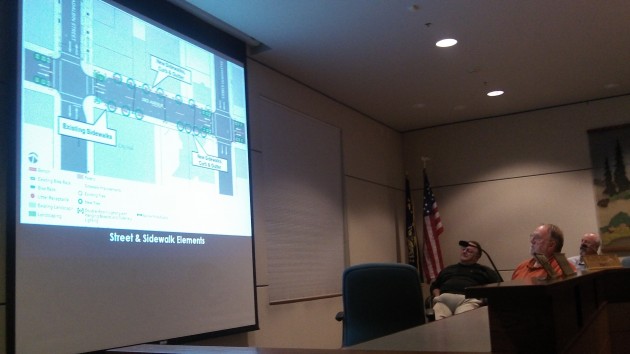