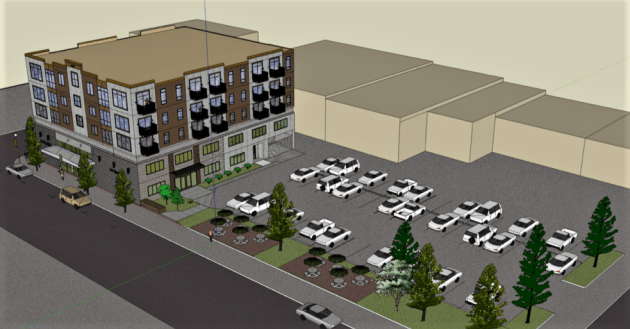 The former Wells Fargo property downtown may look like this some day.

Albany’s CARA urban renewal program reached a milestone Wednesday when the city agreed to lay out more than $6 million toward the refurbishment and restoration of two historic buildings downtown, the former Wells Fargo Bank and the former St. Francis Hotel.

Acting as the Albany Revitalization Agency, the city council approved a request from Gerding Companies Inc., represented by Tom Gerding, for a $2 million grant and a $900,000 loan toward the Wells Fargo project, which the company expects to cost more than $10 million to complete.

After Wells Fargo closed the branch in 2018, the ARA bought the building and parking lot on First Avenue for $1.5 million in order to see the property redeveloped. The loan is to buy the building but not its parking lot from the city.

The ARA or council on Wednesday also approved developer Marc Manley’s request for a grant of up to $3,769,000 toward the restoration of the St. Francis and Rhodes Block buildings, also on First and across Ferry Street from the Wells Fargo property.

For all the details, you can look at the paperwork filed online with the May 19 agendas of the Central Albany Revitalization Area Advisory Board and the ARA. The CARA board recommended approval of both projects, and the ARA/council did so unanimously.

Gerding plans to expand the ground floor and mezzanine of the old bank, which had six stories when it was built in 1916 as the First National Bank. The upper floors were taken down in the 1970s. The company wants to add three stories with 30 units of residential housing. They are also exploring a “rooftop dining element.”

Gerding said some work could start this fall.

At the St. Francis, the CARA contribution will mostly fund work in Phase 1 of the project, which is to secure the building and keep it from falling further into disrepair. Manley plans to renovate the ground floor for businesses as part of the first phase, then work on repurposing the top floors as 27 market-rate apartments. He, too, mentioned a rooftop café.

Albany once had eight multistory hotels. The St. Francis, built in 1915, is the only one still standing.

Council members were eager to have construction start, but first the city has to conclude development agreements with the builders and developers. Also, there’s the land-use review process yet to go through.

And there might be delays. CARA got letters about these projects from two local advocates of historic preservation, but people listening online to the virtual meeting were kept in the dark about what they said.

In any case, having dinner on top of either of these buildings is probably a few years off, if it ever happens at all. (hh)