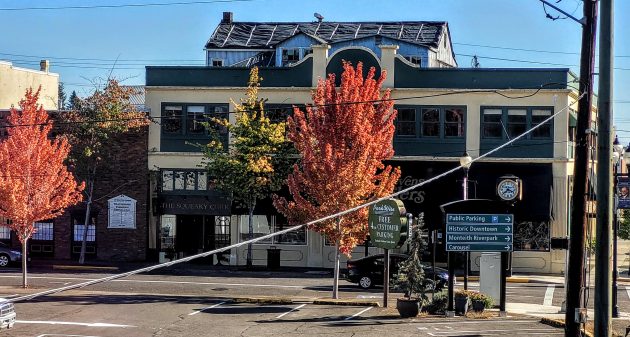 The Bikman Building and its tarp-covered penthouse on Oct. 3. CARA has been asked to help with remodeling the building.

Albany’s urban renewal board faces this question: Whether to reopen its general program of loans and grants for remodeling and other projects, which it had closed down in favor of just three big items.

This came up in September when the CARA advisory board heard of two new requests. One was for help with the costs of remodeling the Bikman Building at First and Ellsworth. The other was from the group that hopes to turn the former Cumberland church into an events center after it is moved (on Sunday presumably) from Main and Santiam to a new site at Santiam and Pine.

Previously, the board and the council, which governs the CARA district, had agreed to take no more applications in order to concentrate most of its remaining borrowing authority of roughly $20 million on three big ventures: redeveloping the Willamette riverfront and helping developers revive the former St. Francis Hotel and the former Wells Fargo branch on First Avenue.

Last month the board failed to pass a motion to stick with the most recent plan, but it agreed to consider the question again at its next meeting. That is coming up Wednesday. The virtual meeting starts at 5:15. Instructions to listen and watch are in the agenda available here.

Sid Stevens, owner of the Bikman Building, in September sent CARA board members an email for consideration under “business from the public.” He was investigating a residential remodeling of the second story with nine units and the penthouse on the roof and had received a preliminary estimate of $1.5-1.6 million for the job.

“This is the only opportunity I have for funding to help fulfill my dream (to) remodel my building,” Stevens wrote. “If you can assure me that you are willing to help, I will spend the money and time to get the information I will need to start this project.”

He may get his answer after the CARA board discussion Wednesday night. (hh) 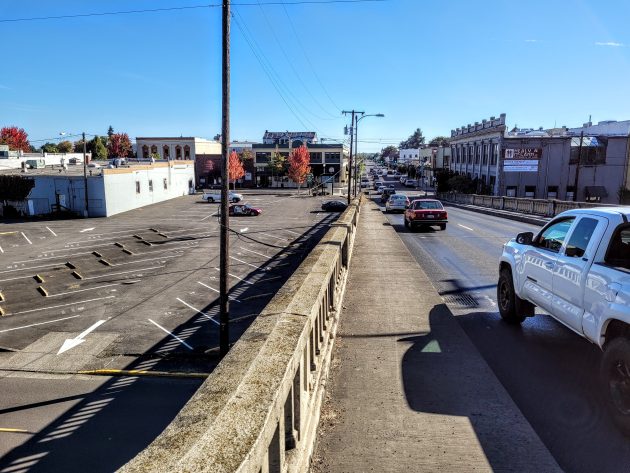 Drivers have this view of the Bikman Building after they pass the crest of the Ellsworth Street Bridge.