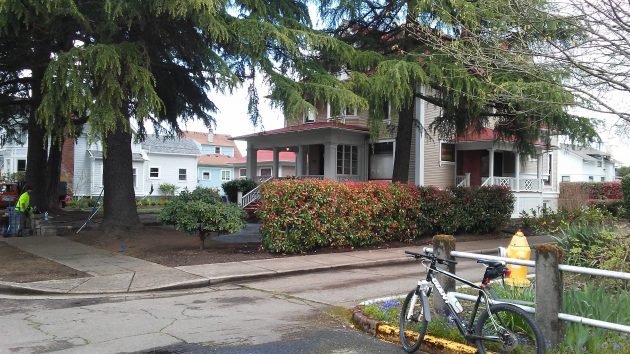 Lots of landscaping work has been going on at the historic Dawson House at Broadalbin and Eighth Avenue.

Downtown Albany will once again offer bed-and-breakfast accommodations in one of the big historic houses downtown, and the CARA urban renewal district has decided to help.

Lindsay Spurlin, the owner, and her mother, Karen Spurlin, have been renovating the so-called Dawson House at 731 Broadalbin St. S.W. This week the advisory board of the Central Albany Revitalization Area unanimously endorsed their application for a five-year loan of $47,432 to allow them to complete the project on which, according to their application, they’ve already spent nearly $120,000.

The house, designed by noted Albany architect Charles Burggraf, was built in 1910 for Alfred Dawson, who operated the Owl Drug Store downtown at the time, according to material submitted to the CARA board. It is said to have 6,000 square feet including a ballroom on the top floor.

Central Albany has had no lodgings for visitors since the Train House and another B&B were converted to other uses some time ago. The Dawson House project has the support of the Albany Visitors Association, which noted in a letter that the house is close to Albany Station. “With these lodging options people would be able to get off the train and walk to their lodging and explore local attractions before moving on,” wrote Jimmy Lucht, the association’s executive director.

The Spurlins say they hope to open their B&B this fall. (hh) 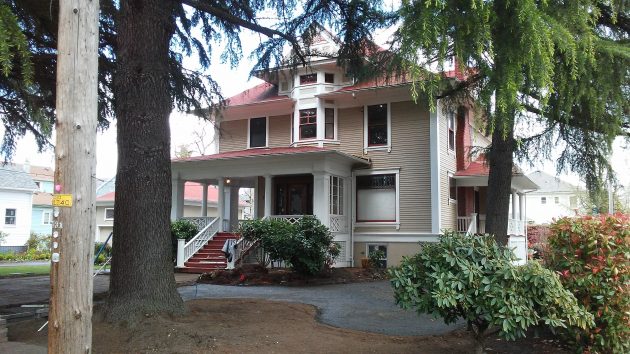 A closer look at the stately old house.