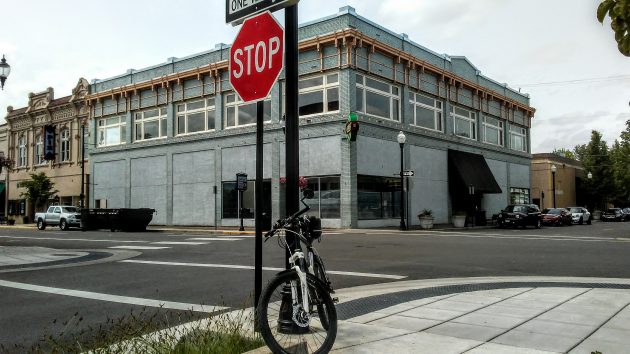 The historic S.E. Young & Son Building the way it looked in May. It’s to be completely restored.

The new owners of the S.E. Young & Son Building have planned a thorough restoration of what used to be a commercial anchor downtown, and they’ve asked Albany’s urban renewal district for help to complete the job.

Oscar and Tamalynne Hult, owners of The Natty Dresser men’s store, say they have raised more than a million dollars in bank and other private financing, and committed a chunk of their own savings. They figure the job will cost more than $1.4 million. And they’ve asked CARA, the Central Albany Revitalization District, for a grant of $259,000.

The grant would allow them to install a new elevator and restore the building’s original show windows facing Second Avenue. The windows on that side and on the side facing Broadalbin Street have been covered over for years. But on Broadalbin, the owners are restoring the windows on their own.

The request goes before the CARA Advisory Board when it meets — virtually and online only — at 5:15 p.m. Wednesday. The complete application, including financial details, can be found with the CARA agenda here.

Since it was built in 1912, the building, most recently Riley’s Bar and Grill, has housed clothing, furniture, and department stores including, for a time, Montgomery Ward’s.

The Hults’ plan is to have their clothing store on the main floor, open the basement as storage units for rent, and develop the upstairs for various potential uses as the market allows. For that, they consider a new elevator to be essential.

The city staff says the Hults’ planned revival of this building meets many of the CARA goals. As for me, I’d say that if they can do everything they hope, or most of it, this will be quite a dramatic improvement downtown. (hh)

8 responses to “CARA asked to help in building restoration”