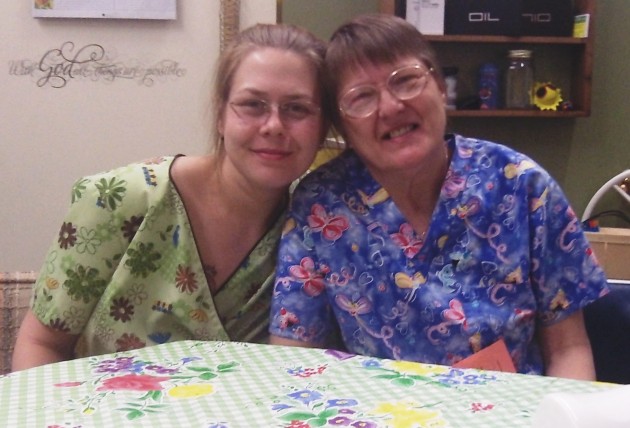 Kendra Ludahl and her mother, Rhea Graham, at Canna Kitchen.

It was Canna Kitchen whose existence indirectly led to marijuana dispensaries being allowed in Albany rather than banned for up to a year. But the mother and daughter running the business say they’ve changed their mind and now will not operate as a state-registered dispensary after all. They decided that all the state-imposed requirements were just too much.

Rhea Graham and her daughter Kendra Ludahl had been running “Albany’s Canna Kitchen & Research LLC” at 2300 Ferry St. S.W, for two years, providing smokeless medical marijuana to holders of state medical marijuana cards, when the law allowing and sharply regulating state-licensed dispensaries took effect in March. That’s when they temporarily shut down and paid the $4,000 application fee to get a provisional license.

Meanwhile, the Albany City Council was preparing to make use of a 2014 law allowing local governments to ban dispensaries for up to a year. The proposed ban fell short of the required four votes on the city council after Councilor Bill Coburn made clear he would not vote for anything that shut down Canna Kitchen. Eventually the council approved a city law allowing dispensaries but barring them from within 300 of any residential zone. The law made an exception from the distance requirement for dispensaries in industrial zones, and this would allow Canna Kitchen to continue where it is.

On Wednesday I had a chat  with Graham and her daughter. They said they decided to change directions because of the stringent state requirements and the prolonged controversy and shutdown. As a state-sanctioned dispensary, they would have had to add expensive security measures, for example, and persons under 18 would not have been allowed on the premises.

In their old business, people with marijuana cards would bring them their weed and the kitchen would turn it into smokeless products such as ointments, tinctures and pills, for the cost of processing. Now the women plan to supply licensed dispensaries instead. They’ll also invite their customers to make the kitchen their official state-approved caregiver so they can continue to help them directly.

They had more than 200 OMMP card holders as regular customers before, Graham says. Now they don’t know how many will pay the state  fee — they say it’s $100 — to change caregivers in order to remain their customers. But apparently there’s no limit to the number of patients a caregiver can have.

As for the $4,000 the kitchen paid trying to become an approved dispensary, Rhea Graham says they hope to get all or most of that back. (hh)