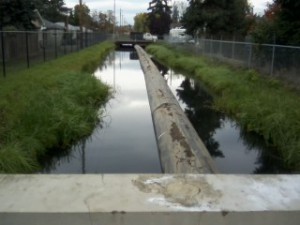 An Albany tidbit from the public works front: What’s that pipe doing in the Santiam Canal? It’s about to the carry as much of the canal water as it can, but that’s only temporary.

The snapshot was taken Tuesday afternoon after a contractor had laid the 48-inch-diameter pipe from just above 12th Avenue to just below Ninth. The workers were intending to dam up the waterway at the up- and downstream ends, forcing most of the flow through the pipeline. This would allow them to dredge or excavate the canal in those three blocks, restoring the waterways’s capacity. The city of Albany contracted for the work as part of its canal maintenance and rehabilitation program.

The historic canal, running 18 miles from the South Santiam River, feeds the Vine Street water treatment plant and the refurbished hydropower generator there before tumbling into the Calapooia River. The generator remains idle while the canal flow is reduced for the dredging job.