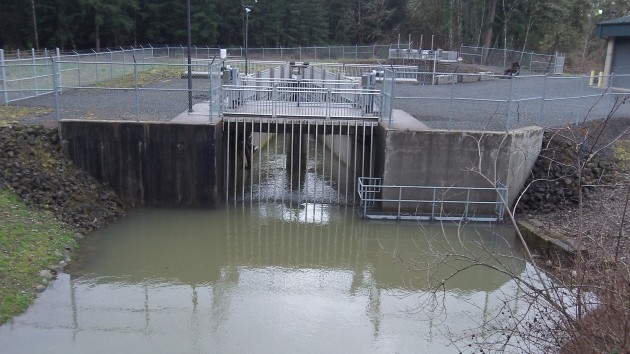 The canal starts here, on the South Santiam River upstream of Lebanon.

Albany and Lebanon city officials have been unable to work out a new agreement governing operations and cost- sharing on the Santiam-Albany Canal, which serves both cities. Now the Albany public works staff is asking its city council for direction, and council discussion is likely Monday afternoon.

At issue is the 18-mile canal Albany bought from Pacific Power & Light in 1984. The canal diverts water from the South Santiam River upstream of Lebanon, winds through Lebanon and feeds the Lebanon water treatment plant, then runs for 12 miles through farm fields and Albany to the city’s Vine Street water treatment and hydropower plant. 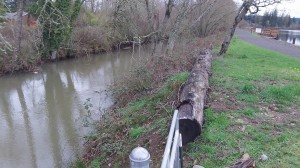 On its way to Lebanon and eventually Albany, the canal skirts Cheadle Lake.

Lebanon is planning to build a new treatment plant and needs a new intake on the canal. Albany wants a new intergovernmental agreement signed before giving permission for the new intake, and because it’s responsible for canal operations it wants ownership of the intake structure when Lebanon builds it.

Albany says Lebanon has fallen behind in paying its share of canal maintenance costs, and Albany and would like that bill — $249,500 without interest, or $323,900 at 7 percent interest — cleared up.  Albany also would like Lebanon to help pay for the multimillion-dollar project of rebuilding, several years ago, the canal head works, which Lebanon says were installed mainly because they were required for Albany to restart its hydropower plant on the Calapooia River.

In response to a question, Lebanon Mayor Paul Aziz said in an email it looked to him as though annual reviews outlined in the existing agreement with Albany stopped happening at some point. “It does not look like it is anyone’s fault, but somehow the process that was in place stopped working on both sides.” He added, “I am confident that we can work with Albany and get this straightened out. Albany has been a good neighbor and partner over the years and we do not want to change that.”

The original canal agreement or IGA between the cities, reached in 1986 according to the city, called for Lebanon to pay one-third and Albany two-thirds of annual canal operating costs, and for both cities to contribute money toward capital expenses. Albany says that Lebanon did not participate in capital expenses and fell behind in paying for operations.

Lebanon Public Works Director Ron Whitlach responded in an email: “Lebanon has been paying Albany for canal maintenance since the IGA was created in 1984. In 2007, Lebanon did not pay the bill sent by Albany due to it being well over the allowed annual 10 percent increase for canal costs. Since that time there have been several verbal understandings and sporadic payments for canal maintenance. Staff from Lebanon has indicated to Albany that the back payment of approximately $250K would be paid if documentation of maintenance activities could be provided per the IGA.”

Albany officials over the years have complained that much of Lebanon’s storm water drainage ends up in the canal, which the city says has led to maintenance problems and occasional flooding even when the head gates were closed. The Albany staff wants this issue addressed in a new agreement.

Lebanon’s Whitlach says storm drainage has been discharged to the canal since the canal was built and long before Albany bought it from PP&L and redirecting the historic drainage patterns would cost Lebanon a lot of money — if it was possible at all. “We have offered to quantify storm drainage going to the canal through the use of flow monitoring in an effort to help Albany in regards to operating the canal.”

The Albany council will take up the canal issue when it meets for a work session at 4 p.m. Monday at City Hall. Final decisions are  not expected, but the council may give Public Works some direction for further talks with Lebanon. (hh)