Canal fight getting out of hand 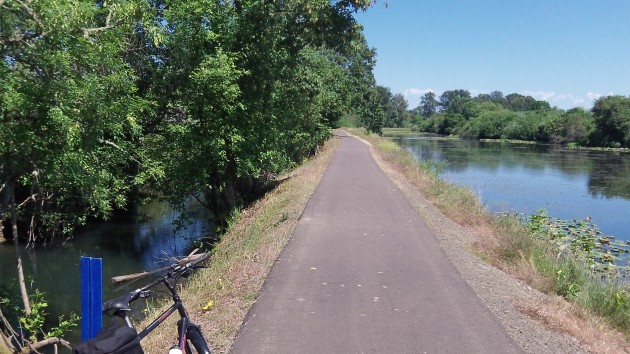 The Albany Santiam Canal on the left; Cheadle Lake on the right of the embankment and path.

It hasn’t come to blows yet, but it may — I’m talking figuratively, I hope — in the fight between city officials of Albany and Lebanon over the Albany-Lebanon Canal. On Friday it looked as though the dispute would reach a boiling point at Cheadle Lake, the former log pond Lebanon has turned into a park-like waterway laced with trails.

Albany City Manager Wes Hare has tried for a year or more to get Lebanon to live up to a 1986 agreement that splits the costs of operating, maintaining and improving the canal, with Albany paying two-thirds and Lebanon one-third. Lebanon has offered to pay $77,000 a year, but Albany says annual costs of operating the canal are between $700,000 and $800,000, not counting any spending related to the Albany hydropower plant.

Most recently, Albany proposed a compromise: Lebanon’s annual payment would be capped at $125,000, with Lebanon making a one-time payment of $1.2 million toward capital costs over several years. Albany would forgo the $1.2 million if Lebanon agreed to spend that amount to reduce storm water running into the canal from within Lebanon and sometimes causing flooding downstream.

Hare has been expecting a Lebanon counterproposal, but none has come. Albany’s contends its water ratepayers are paying bills higher than necessary because Lebanon is not paying its share of the costs of the Albany-owned 18-mile canal, which supplies all of Lebanon’s and part of Albany’s domestic water. Lebanon is working on getting its own water source on the South Santiam River so it can stop using the canal.

That sets the scene. Now for the latest.

On June 1, Hare wrote to Lebanon City Manager Gary Marks demanding that Lebanon quit pumping water from the canal to augment Cheadle Lake. The letter claimed that “new piping has been connected to the pump,” that pumping from the canal into the lake was not authorized and the piping “must be removed immediatey.” Further, Hare threatened that Albany would remove the pumpling equipment within the canal right of way unless it heard from Lebanon by Friday.

Outrage from Lebanon was immediate. The city issued a press release titled: “Lebanon rejects Albany’s demand to drain Cheadle Lake.” (No such demand had been made.) Lebanon City Attorney Tre Kennedy also, in a letter to Albany City Attorney Jim Delapoer, pointed out, with documentation, that Albany officials had in fact approved of the pumping to augment Cheadle Lake in 2010.

Kennedy objected to what he called “strong-arm tactics to bully Lebanon” in the canal negotiations. And, tit for tat, he revoked permission for Albany officials to access the canal via Lebanon property, said the locks had been changed, and if Albany officials entered without 48-hour advance written notice the Lebanon police would cite them for trespass.

I checked out Cheadle Lake Friday. Everything was calm, but I did not find the pump. All I saw was some rusted old equipment near the entrance where the pipes were long gone.

An embankment separates the pond from the canal for about 0.85 miles (according to my bike computer). From the paved path crowning the embankment, it looked to me as though the lake level was higher than the water in the canal. Those water levels had been of concern to inspectors from the Federal Energy Regulatory Commission in 2014 and again last month. They say that if the lake level is higher than the canal, the embanknent becomes a dam and the lake a reservoir, and this requires safety inspections that in turn require removal of vegetation. (Check the video for a look at the scene.)

It was this FERC concern, and the possible added expense of dealing with it, that prompted Hare’s letter demanding that Lebanon quit raising the level of the pond by pumping. Looking at it on a hot afternoon, though, it’s hard to see a problem. Even if the embankment leaked or even failed in a spot, only a small part of the water in the pond would enter the canal, raising its level, but not by much. The difference in levels wasn’t more than a foot or so.

On Friday Hare told me what he has said before: All he wants is for the cities to reach a fair agreement on sharing costs of the canal. To that end, Albany has offered mediation or even arbitration, but so far no luck. (hh)


11 responses to “Canal fight getting out of hand”