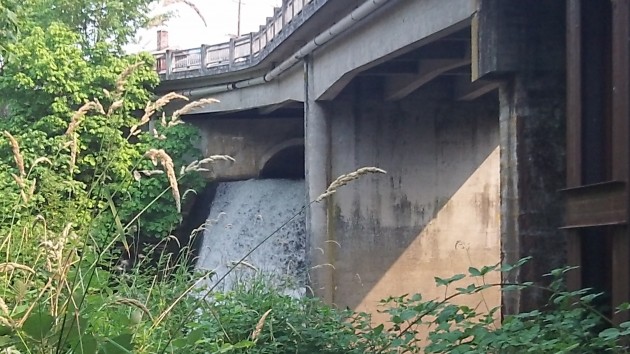 Oblivious to any upstream issues, the Santiam Canal spills its big surplus flow into the Calapooia River at Albany.

In Texas and maybe elsewhere, they say that whiskey is for drinking and water is for fighting over. Let’s hope a fight can be avoided in the lingering, water-related dispute between the cities of Albany and Lebanon. The impasse is holding up Lebanon’s plans to build a new treatment plant.

At issue is how much if anything Lebanon should pay Albany for the improvements built at the intake of the Albany-owned Santiam Canal in 2005 and ’06. There are other issues in the canal discussions, but the money angle seems to be the thorniest. 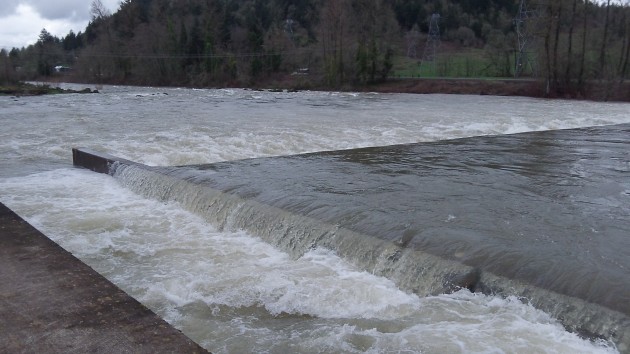 Albany says it spent upwards of $6 million on rebuilding the Lebanon Dam, automating the canal headgates and installing screens to protect wild fish. The timing was dictated by Albany’s resumption of power production at the canal’s Albany end, but the city maintains the fish protection measures were required anyway by state and federal rules to avoid killing threatened species of spring chinook and winter steelhead.

At the time, Lebanon had planned to quit using the canal as its water supply, so it did not participate in the costs of the work at the dam. Later, Lebanon found its alternative plans — to develop wells — did not work out, and now it wants to build a new treatment plant that would take water at a new intake on the canal.

Albany says not so fast, first we want an agreement on various canal issues along with money, half of the $6 million we spent. Faced with Albany’s demands, Lebanon has stopped design on its new treatment plant. Instructed by their respective city councils, officials from both towns have been negotiating. Another meeting is scheduled on Aug. 28.

Lebanon city engineer Ron Whitlatch says: “Our contention is we are a small user in comparison to Albany, and it seems unfair to request almost $3.8 million in back capital. Our usage in terms of actual flows in the canal for the last several years is approximately 3 percent.”

Sounds reasonable, especially in view of the fact that Albany sank millions into the river intake without any expectation at the time of Lebanon paying any of it. On the other hand, Lebanon has been going like gangbusters with big developments — a huge distribution center, a medical school, a state veterans home, a big new hotel and so forth. Why should Albany ratepayers continue to be the only ones paying down water bonds that indirectly make possible job creation in a neighboring town?

Hard as it may seem, a compromise has to be reached. Remember the historic agreement in 2002 by Albany and Millersburg to develop a joint water intake on the Santiam River and treatment plant on Scravel Hill, with costs to be shared based on the capacity needed by each. It took two magnanimous mayors, Chuck McLaran and Clayton Wood, to make that deal possible. Let’s hope Lebanon and Albany can achieve something similar now. (hh)