Can we use rebuilt path? Not just yet

Written May 12th, 2020 by Hasso Hering
Comments: no responses. 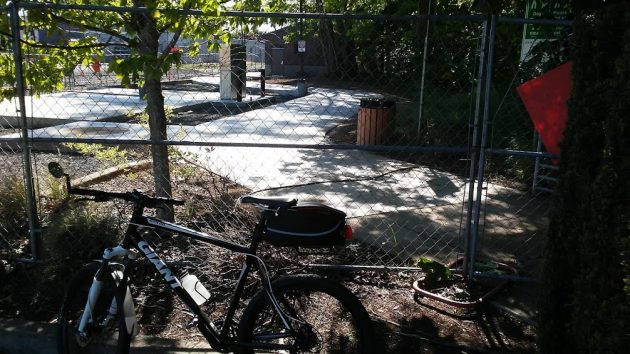 The rebuilt segment of the Clark Path, as seen through the construction fence on May 8.

Users of Albany’s Dave Clark Riverfront Path are going to have to wait another month or so before they can travel along its entire, uninterrupted length.

The popular walking and cycling path was blocked near Montgomery Street last July for the construction of a wet-weather sewer lift station. That project was completed about a week ago with the installation of three big underground pumps.

With the heavy equipment and contractor’s work crews gone from the site, and a new section of the concrete path winding its way through it, I had expected the fencing to be removed and the path to reopen pretty soon. But the fence is still there.

Whenever I have a question about this project, I turn to Chris Cerklewski, the engineer in Albany Public Works who oversees this one and several others.

“While the pathway itself has been completed,” he told me by email on Tuesday, “we still need to complete the landscaping adjacent to the path. The landscaping is anticipated to be completed by mid-June, and the path should be able to reopen shortly thereafter.”

I guess there’s more to it than shoveling in some dirt and spreading a few bags of grass seed. We’ll see what sort of landscaping the plans require and how elaborate it is when the job is done.

For now, the detour around the construction site remains in place, along with the fencing to keep people out. (hh)