Can Oregon GOP ever come back? 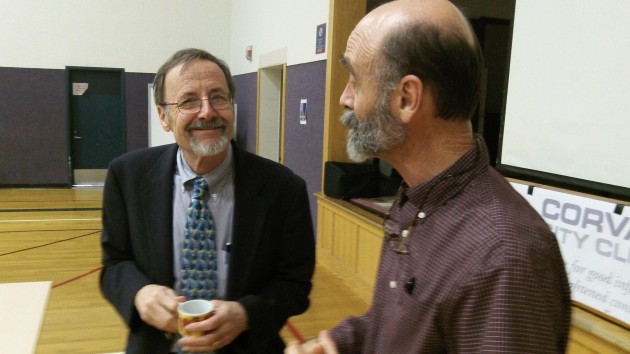 What are the chances that Republicans will ever regain the Oregon statewide offices they held a generation ago? According to what I heard from Bill Lunch on Monday, I would say between not great to vanishingly small.

Lunch is retired from teaching political science at Oregon State University. But he’s still very much active in the field, analyzing politics and, among other things, appearing on Oregon public radio on Friday mornings. On Monday, at the monthly meeting of the Corvallis City Club, he gave a talk about the elections last November.

In case you forgot, Governor Kitzhaber, a Democrat, won re-election even though he carried only seven of Oregon’s 36 counties, Benton among them. And U.S. Sen. Jeff Merkley also was re-elected, by a bigger margin than the governor.

I asked Lunch what he would recommend to Oregon Republicans as a comeback plan. If today’s Republicans went back to the positions taken by the generation of GOP leaders that included Mark Hatfield, Bob Packwood and Tom McCall, they’d do a lot better in statewide elections, in Lunch’s opinion, especially among affluent suburban women. They might even win some otherwise close elections.

Republicans of the McCall era by and large were for protecting the environment and equal rights of minorities and women. Who knows whether they would take the same positions on environmental bills today, when some of the laws enacted in the ’60s and ’70s have been used to decimate Oregon’s wood products industry and to vastly expand the control of government over details of daily life.

I asked Lunch about something else: How come many of the voters who re-elected Kitzhaber to a fourth term also voted against driver cards for illegal immigrants, an idea Kitzhaber was very much for? Lunch’s explanation: Most voters are not sophisticated enough to connect office holders with specific policies that don’t affect them personally. So lots of voters who strongly objected to the driver cards evidently had no clue that the cards were the governor’s idea.

If that explanation is right, it leads to another question: If most voters don’t know what they’re doing, why do we hold elections in such high regard? (hh)


4 responses to “Can Oregon GOP ever come back?”