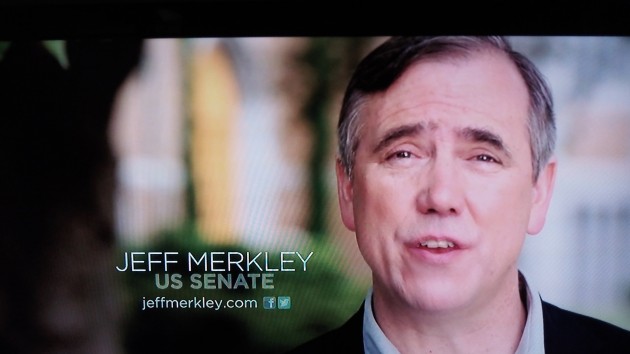 Sen. Jeff Merkley in one of his TV ads for re-election.

Merkley has been in the Senate for six years without having advanced a solution to any of our problems. Oregon’s federal forests remain mismanaged and there’s no change in sight; the federal tax code is a mess that holds back our economy; the federal power system on the Columbia is under renewed attack from Merkley’s fellow Democrats and environmental activists in the face of inaction in the Senate or House to protect it. And so forth.

In a completely candid campaign ad, our junior senator would say something like this: “Look, I know I haven’t done much for the country or our state. I haven’t even made any notable speeches or done anything else big to earn the money you pay me. But I’m learning. I promise that if you elect me again, I’ll vote to fix the problems with Obamacare, which I voted for after I told people I had read the bill and they could keep the insurance they had. Well, that turned out to be untrue, but look, everybody makes mistakes and I was still pretty new in the Senate. Truth is, they don’t pay any attention there to first-term senators from a small state. That ‘s why you should make me a second-term senator, and then I can do more.”

That’s not’s not what he or any other politician is ever going to say. Instead, in this commercial Merkley says he was the first in his family to go to college. So what? The ad features several fresh-faced young people, all bragging about going to college. Then Merkley comes on and declares that’s why he stood up to Wall Street. (Wall Street is probably still shaking in its boots.) What the senator apparently did, according to the small print in the ad, is that he sponsored a bill related to college loans.

College loans — that’s part of the problem, and making them easier to get does not solve it. If Merkley really wanted to stand up to anybody on this issue, he would protest the outrageous prices being charged for tuition and fees, and he would call out the universities for their lavish spending on layer upon layer of administration and other things unrelated to instruction and research.

Merkley is said to be ahead in the pre-election polls. All that shows is that an electorate that replaced a first-rate senator with Jeff Merkley six years ago has not learned anything since. (hh)