Campaign brewing in Ward I 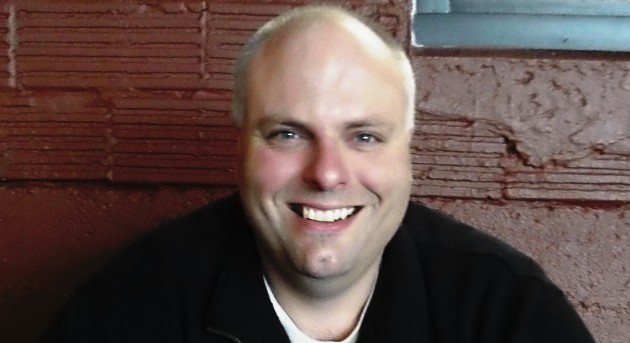 It’s early yet, but Albany has the first announced challenger this year for a seat on the city council, and it looks as though voters can look forward to a spirited campaign of actual substance. Kevin Manske, co-owner with his wife of CNS Firearms and a  firearms training business, announced his candidacy this week. He’s running for the Ward I seat occupied by Dick Olsen, who is finishing his fourth consecutive four-year term this year. 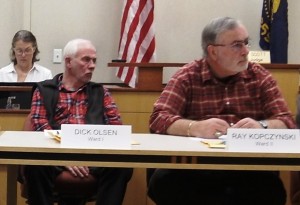 Councilor Olsen (with Councilor Kopczynski, right) at a meeting in February.

Councilor Olsen, a retired research chemist at the former Bureau of Mines, told me Wednesday he’s planning on running again. He’s going for a record as the longest-serving council member in Albany history, he joked. (There may be an existing record for council longevity in the city’s 150-year history, but I don’t know to whom it belongs.)

Manske is 39 and a member since earlier this year of the 14-member advisory board of CARA, the Central Albany Revitalization Area. I sat down with him for a chat Wednesday, and he told me he’d like the downtown urban renewal district to concentrate on a big project that would come closer to the goal of actually revitalizing downtown. He thought that improving Water Avenue and aggressively encouraging private development there could do a lot of good.

Manske recently voted against, as too expensive in relation to the gain, a CARA grant of $336,000 to help restore the former Fortmiller Funeral Home Building on Third Avenue as well as a $200,000 forgivable loan to help Novak’s Hungarian Restaurant rebuild a historic butcher’s shop downtown. Olsen supported both requests, which the CARA Board majority also supported.

Manske has lived in Albany for 20 of his 39 years, including eight years as an officer on the city police, a job he quit. If he were on the council now, he’d vote for a one-year ban on medical marijuana dispensaries to give the city more time to prepare for a time when he’s sure recreational marijuana use will become legal in Oregon. Olsen is one of the three councilors opposed to a ban because, among other things, he doesn’t want to make it harder for sick people to get a legal substance they believe helps them.

Manske is business-oriented, serving on the Chamber of Commerce government affairs committee and having gone through the chamber’s leadership training in 2013. Besides making the city friendlier to business, he says he’d like to strengthen the relationship between City Hall and the Linn County commissioners. Linn County and the city have been at odds over urban renewal funding, which has diminished the levy amounts available to the sheriff, and also over Albany’s hotel tax revenue, part of which the county would like to help support the Fair & Expo Center.

So there will be plenty to talk about when the campaign gets going at the end of the summer, at least in Ward I, which covers North Albany and much of downtown. (hh)

(Also up for election in November 2014 are the Albany council seats held by Ray Kopczynski in Ward II and Bessie Johnson in Ward III. The city has received no candidate filings from anyone and won’t accept any until the official filing period of Aug. 5-20, 2014)


3 responses to “Campaign brewing in Ward I”