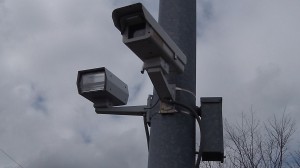 One of the red-light cameras, with its light, at Queen and Geary in Albany.

This is how the surveillance society grows — with good intentions every step of the way.

You may remember some years ago when Albany was added to the cities authorized to install red-light cameras. After much debate, the city installed one set of two, at the corner of Geary Street and Queen. The last time the local paper checked, the cameras had caught mostly drivers who didn’t stop completely before making a right turn on red. Whether accidents were reduced, I don’t remember.

The law authorizing the cameras says they can be used only for traffic enforcement. Washington state has a similar law, and there, a judge authorized footage to be used in a criminal investigation, now the subject of a court challenge. With this in mind, the Oregon House Judiciary Committtee held a hearing March 28 on House Bill 2601, which would remove the limitation on using red-light camera images. They could be used for anything, though a proposed amendment would allow their use only in criminal investigations.

Who could possibly be against catching a robber or kidnapper because a red-light camera saw him and could identify his car or his  face? So the bill will no doubt pass. Sooner or later, the question then will be: To what other uses could government cameras in public places be put? (hh)