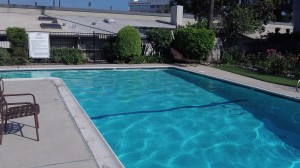 A pool in Newport Beach: What happens if California runs short on water?

California is having its driest winter season in a century and a half. We should not be surprised if sooner or later, somebody tries to revive the schemes of 30 or 40 years ago to tap the rivers of Oregon to help the nation’s biggest state survive.
The most recent notion, if memory serves, was proposed by a Los Angeles County supervisor in the 1970s.The idea was to construct a pipeline and pumping system to capture a small fraction of the Columbia River’s copious flow at its mouth, just before it churns across the bar, and pipe it south. The idea was scorned in Oregon and never got past the conceptual stage. But this may change if conditions get worse.

According to a report in the San Jose Mercury News on Jan. 30, some scientists think California may be in for a megadrought of the kind it has seen with some regularity over thousands of years. The scientists have studied tree rings and other clues in the natural record. They found many severely dry periods lasting 20 years or so. But they also found one that started in 850 and lasted 240 years, followed by another that lasted 180 years.

California now has 38 million people, nearly 10 times the population of Oregon. Sources quoted in the San Jose story speculated that the population of cities could probably cope by adopting severe conservation measures and paying much more for the water still available, but California agriculture would disappear because the price of irrigation would be more than the crops would bring.

One thing worth noting: Since we can’t blame long western droughts a thousand years ago on people burning fossil fuels, we should not blame current droughts on that either. What the studies show is that climate does indeed change, and we had better learn to cope. Sending Oregon water south would be a stretch, but if it’s technically feasible, it may indeed be attempted some day, and probably well before the California drought has lasted 100 years. (hh)