CA gas price: We may be next 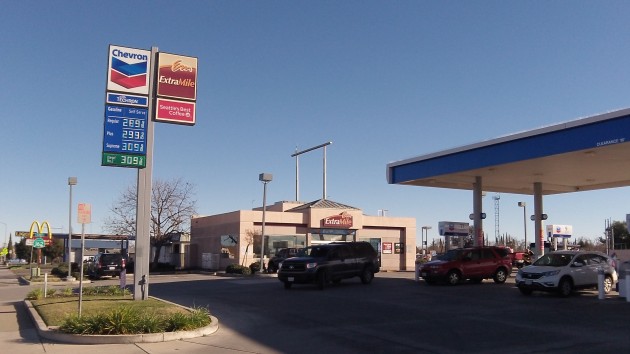 You can read what they charged at a station off the freeway in Willows, CA, on Sunday.

The Oregon traveler in California is in for a shock, or at least a mild surprise, when he stops for gas for the first time: The price of gas is about half a dollar more south of the state line than north of it. And that’s even though you do the pumping yourself.

How come? The public explanations are not all that clear, and most of them we’ve heard before in connection with fuel price spikes up and down the west Coast: The change from summer to winter fuel, which can be produced only in certain refineries; the shutdown of refineries either for maintenance or because of accidents like fires; the small number of refineries; state taxes that differ from state to state; and so forth.

In California, the explanations for gas prices higher than elsewhere also include a special carbon tax to fight climate change, the result of a state-run cap-and-trade system that has been applied to motor fuels since Jan. 1, 2015. Before that date, the California Air Resources Board estimated the law would raise the price of fuel by 12 cents a gallon to start and up to 76 cents  later on. If that’s how it worked out, it would account for part or all of the price difference in the two states.

This was a hot topic in Oregon last year when Oregon’s so-called clean-fuels program was set to expire before it was actually applied. Critics — including me — warned that the state’s program would raise the price of gas just like in California. But the Democratic majority in the legislature renewed the anti-carbon law anyway.

So while we’re still enjoying relatively low prices for gasoline and diesel (Diesel was under $2 a gallon at one station on Pacific on Saturday), those days may be numbered. But at least we can still sit in our cars and let somebody else pump the gas. (hh)


One response to “CA gas price: We may be next”