By the roadside, an empty bottle … 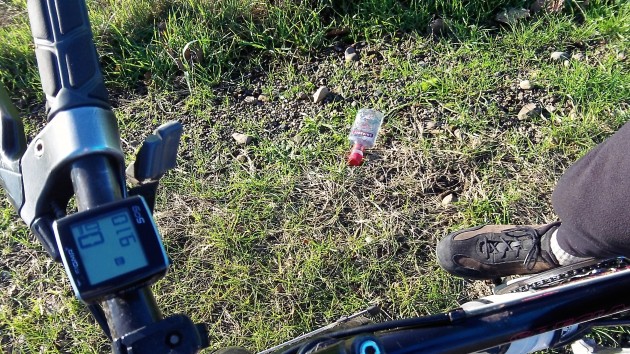 A vodka drinker left this by the side of Buena Vista Road.

This person who threw this empty Smirnoff bottle out the window of a passing vehicle did cycists like me a favor. He — let’s say it’s more likely a man than a woman — also highlighted a failing in Oregon’s Bottle Bill.

One  hazard bike riders face is broken glass on Oregon roads. So one favor in this case was that the litterbug emptied a bottle made of plastic and not of glass before pitching it out the window. Another was that he tossed it far enough that it landed in the grass and not on the asphalt, so if it had been glass, it would not have shattered and left all kinds of sharp little shards where a bike tire would find them.

We can only hope that this was a passenger and not a driver getting rid of evidence.

As for the Bottle Bill, in 2011 it was amended to require deposits, starting in 2018, not just on soft drink, beer and water containers but also other drinks such as sports drinks, teas and coffees. There will still be exceptions, though, and those include distilled spirits. So our drink-and-drive litterbugs will have no additional incentive to keep their empties inside their cars.

Of course in case of liquor, a 5-cent deposit would mean nothing even if it was required. I recommend a survey to see how much roadside trash consists of bottles that contained spirits. And if the percentage is significant, then I suggest the law be amended to require a deposit of 10 percent of the retail price when the bottle is full. This would help especially if the grocery lobby manages to pass its proposed initiative ending the state’s liquor monopoly. That measure would result in liquor being sold in groceries, and presumably more empties ending up in the roadside grass. (hh)