Buses would video failures to stop 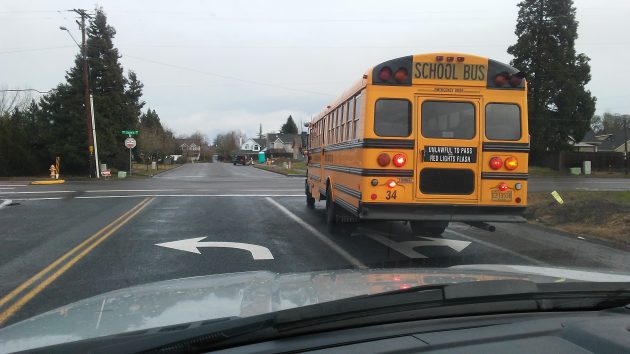 An Albany school bus, without outside traffic cameras, near the end of its run Tuesday afternoon.

A bill pending in the Oregon House aims to discourage drivers from blowing past the warning lights and “stop” signs on school buses. To that end it would let police issue tickets based on video evidence from school bus cameras. The tickets would cost $435 each.

The House Judiciary Committee held a hearing on the bill, HB 2460, on Feb.13 and has not yet acted on it otherwise. Mid-valley Reps. Andy Olson of Albany and Sherrie Sprenger of Scio sit on the committee. So if you have an opinion on the bill, let them know.

Testimony before the committee, from the Department of Education’s man in charge of transportation, was that based on a one-day sampling, Oregon drivers fail to stop for school buses about 1,300 times a day. But since the start of the 2015-16 school year, not a single child has come to harm because of it. Bus drivers are under strict instructions not to let children cross the street until it’s safe.

Under the bill, police could issue tickets to offending drivers after reviewing videos from school bus cameras. To make this work, buses would have to be equipped with outside cameras at an estimated $2,000-$3,000 per bus. Oregon has about 4,900 school buses.

The cameras record video either during a bus’s entire daily runs or just when the bus driver activates the yellow warning lights. Bus drivers are supposed to activate the yellow lights 100-200 feet before stopping and turning on the red. But they don’t always, the committee was told. So this would be different from red-light cameras, where the timing of the yellow is uniform because it’s controlled by the machine.

Issuing tickets would work the same as with red-light cameras. The registered owners of offending vehicles would get tickets in the mail. If they weren’t the ones driving, they could submit a sworn statement to that effect and the tickets would be dismissed. Olson and Sprenger asked questions about the procedure. Among other things, one or both of them wondered about people who no longer own the offending vehicles or don’t get the mailed citations and fail to respond in the 30 days allowed — and then end up being cited for failure to appear.

The committee was told that Springfield schools are testing the video idea and reporting to the Department of Education, but no citations have been written as part of the test. (hh)


7 responses to “Buses would video failures to stop”