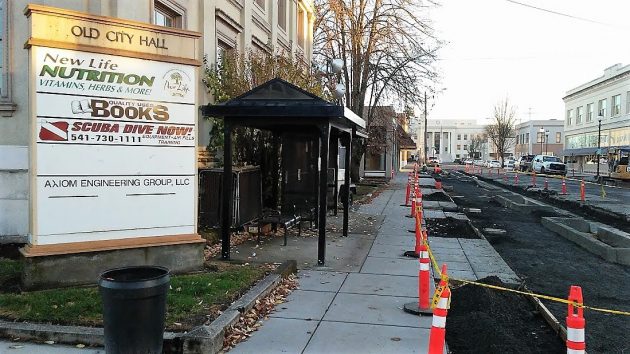 This downtown bus stop and shelter has been closed since August and won’t be reopened when the Broadalbin Street sidewalk widening is done.

The public transit bus shelter is still there, but buses are gone from Broadalbin Street because of the downtown Albany streetscape project. And replacing the downtown stop with two others will eventually remove some on-street parking from Ellsworth and Lyon Streets.

Wandering around downtown on an idle afternoon this week, I was reminded of the bus service changes made necessary by the $8.5 million project to revamp the code area sidewalks and streets.

When the Broadalbin bus shelter in front of the old city hall was closed in August, it was replaced by a temporary stop, without bench or roof, on Washington Street in front of the post office. Earlier this month, the city council was briefed on plans for a permanent solution once the streetscape job is done next year.

In short, the plan is to have two bus stops downtown, one each on opposite legs of the Highway 20 couplet. One will be on the west side of Ellsworth near City Hall, and this will include a shelter. The other one will be on the east side of Lyon, in front of the office of Linn County Parole and Probation. The city plans no shelter there because the building has an awning that sticks out two or three feet over the sidewalk.

The new bus stops on busy Highway 20 will eliminate on-street parking spaces, five on Lyon and two on Ellsworth.

Meanwhile, City Engineer Staci Belcastro told me, a shelter will be installed at the temporary stop in front of the post office, but she didn’t know when. Considering that the rainy season is under way and winter is coming, I’d say it had better be soon. (hh) 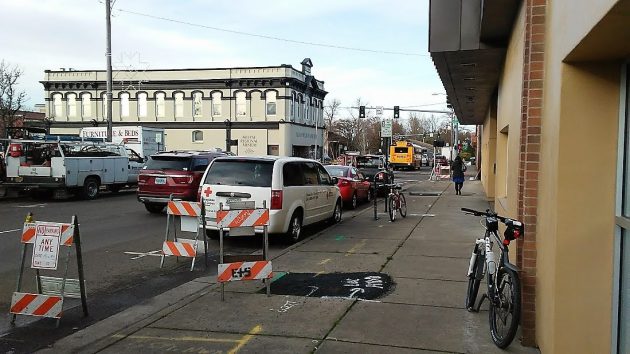 The awning here will take the place of a shelter at the location of a planned Lyon Street bus stop.