Burkhart Square: Going beyond the plaque 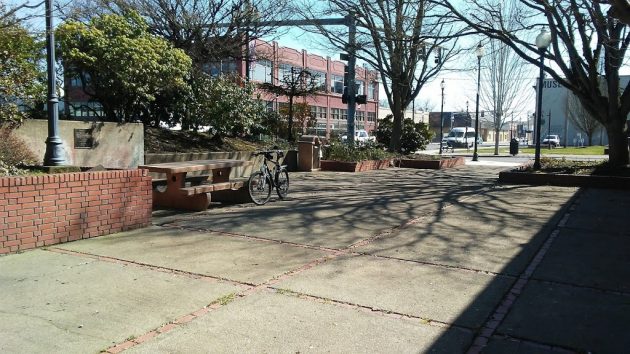 The patch of Albany urban space known as Burkhart Square on the afternoon of March 17.

Prompted by a reader’s comment about Albany’s Burkhart Square, I stopped there recently to take a look. One thing that made me want to know more was the plaque containing the dedication.

Burkhart Square is a one-acre patch of concrete, landscaping and brickwork between the Lyon Street Bridge and the Albany Civic Theater. Owned by ODOT, it’s also listed among the Albany city parks. This is the plaque on the concrete wall: 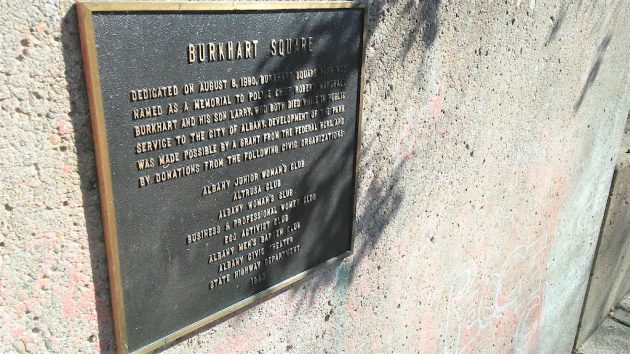 From the inscription we learn that the space was dedicated in 1980 and named as a memorial to Police Chief Robert Marshall Burkhart and his son Larry, “who both died while in public service to the city of Albany.” That’s all it says about them.

In 1980 I was in my third year at the Democrat-Herald. But I remember nothing about the origin of this public space, or about the men for whom it was named.

To learn more, I turned once again to the Albany Regional Museum, a block from Burkhart Square at Lyon Street and Second Avenue.

There, staff member Erica Broad, helpful as always, came up with a clipping from the Democrat-Herald of March 24, 1970. It reported that Police Chief Robert M. Burkhart had died early that day at Albany General Hospital. He was 46 years old, and what killed him was an apparent heart attack. He had been chief of the Albany police for about eight years, starting in 1962.

The files had nothing about Larry, but the museum’s Bill Maddy found a website that gave his birth year as 1951 and the date of his death as Dec. 1, 1978.

That took me to the newspaper microfilm files at the main branch of the Albany Public Library. Library Director Ed Gallagher was kind enough to show me how to work the film reader, which was a few steps above the antediluvian machine we used at the paper back in the day.

In short order, I found Larry’s obituary on page 2 of the edition for Dec. 2, 1978, the day after he died. (Those were the days when newspapers considered it their duty to the readers to write obituaries on their own and run them as part of the community’s news. Now they wait for the family or funeral home to compose flowery tributes and run them as paid items whenever they come in.)

It was a short obit.  It said Larry Burkhart had died the day before at age 27. It didn’t give the cause of death. But it did add the fact that Larry had served in the army from 1970 to ’73, that he was a Vietnam veteran, that he was a son of the late Chief Burkhart, and that he was survived by his wife and mother.

It also explained the phrase “while in public service to the city” that appears on the plaque: At the time of his death, Larry was employed as an equipment operator with the Albany Parks and Recreation Department.

One other thing: The plaque credited a grant from the “federal HCRS.” Never heard of that agency, but Wikipedia has: The Heritage Conservation and Recreation Service was created in 1978 during the Carter administration to identify and protect cultural and other resources. In 1981, under Reagan, it was abolished and absorbed in the National Park Service.

Wall plaques are not the place for explanations. So if you want answers and context, you sometimes have to hunt them down.

The commenter who launched me on this story had complained about the condition of Burkhart Square. I did notice that the brick work needs repairs, but otherwise the little square (actually a rectangle) didn’t look bad on that sunny afternoon in mid-March. Except for the dumb dots over some letters in the sign high on the wall opposite from the plaque. (hh) 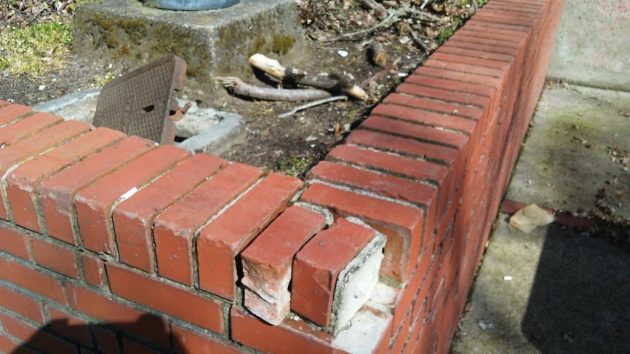 Somebody must have bumped into this corner in the Burkhart Square brickwork. 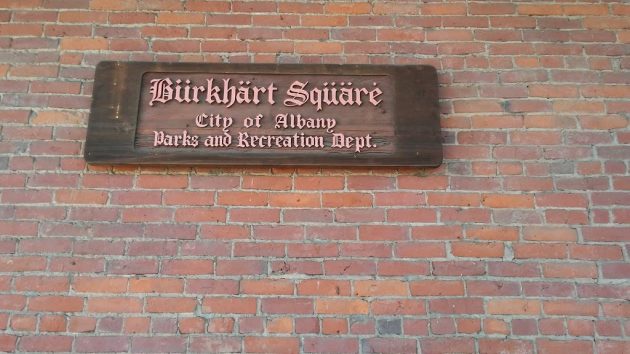 What are those dots doing on the vowels of Burkhart Square?


10 responses to “Burkhart Square: Going beyond the plaque”