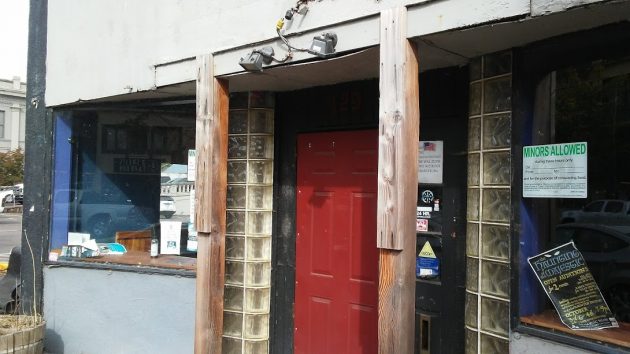 The front of the former Espalon restaurant and tavern on Sept.15.

The front of 129 W. First Ave. in downtown Albany looks like the picture of what they mean by “blight.” But maybe not for much longer, as the property known as the Burggraf Building is under contract to a potential buyer.

The former “Espolon” restaurant and tavern has been closed for two years. A sign in the window still says it would be closed for a week for remodeling. But when repairs were attempted in September 2016, part of the front wall fell down, and the city issued a stop-work order. The collapsed section was boarded up and the entryway braced, and that’s the way things remain.

A 2017 staff report to the Albany Landmarks Advisory Commission said this: “The circa 1919 commercial retail building at 129 1st Avenue NW was designed by Charles Burggraf and originally occupied by McAlphin’s Confectionery Store.”

Gary C. Nieland, who lives in Las Vegas, owns the property, listed on county tax records as having a market value of $256,530. Last November, the owner submitted for city review a plan to renovate the structure. The renovation was designed by Varitone Architecture, and the Landmarks board approved it on Jan. 3, 2018.

In March a Salem contractor applied for a building permit, which the Albany Building Division approved but was never picked up.

The Albany Civic Theater next door has been interested in the building but is not attempting to buy it now, I learned from Dean Keeling, the theater board’s chairman.

Bill MacHugh, an agent with Keller Williams Realty in Albany, had been listing the property for sale. He told me today that it’s “under contract” to be sold. The potential buyer is doing “due diligence,” whatever that means exactly, and if things work out the sale should close in December.

MacHugh was not at liberty to disclose the buyer’s name or the property’s potential use. One assumes, however, that one way or another the front and the rest of this downtown building will be repaired when and if the sale takes place. (hh) 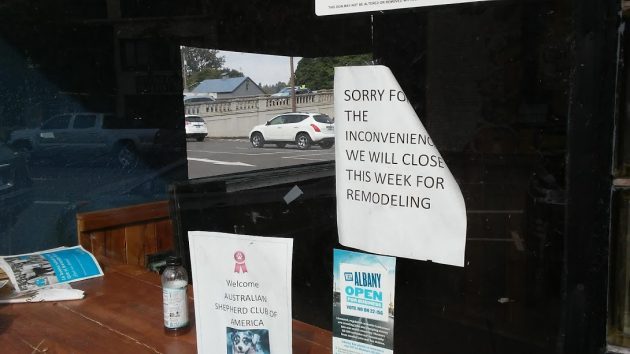 That sign in the window, still there last week after two-plus years, proved a bit on the optimistic side.

Varitone Achitecture, a downtown Albany firm, designed how the property could be fixed up.