Bundled and cut off 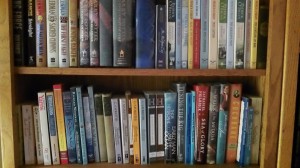 For when the TV and Internet fail…

Maybe bundling is not such a good idea when it comes to telecommunications and entertainment. The thought might have occurred to people in the Albany area on Thursday. That’s when Comcast customers who had bundled their services lost not just cable TV and the Internet but phone service too. Comcast blamed the problem, which lasted several hours, on someone damaging a fiber-optic cable in Benton County.

The outage started in mid-morning and in some parts of the Albany area lasted well into the evening, when a storm brought lightning and copious amounts of rain as well. Whether coincidence or not, Verizon and AT&T customers found that their mobile phones didn’t work either. And just to round things out, the power failed as well. Good old phone company landlines presumably still worked, unless they were connected to wireless phones whose base stations depend on the power grid.

This experience lasted less than a day. Imagine how you would get by if, because of some natural or manmade event, all basic services failed not just for a few hours but for days or weeks at a time. It could happen, so it’s best always to have enough food, water and candles to be prepared to rough it for a while. And books to take the place of TV! (hh)

From Lisa Campbell, via Facebook: I said this very thing yesterday. plus if there were a disaster the cell towers would be overloaded and so many of us no longer have landlines.

From Rich Kellum, via Facebook: We were out of service for part of one day.  If you wrote something for the blog during that time, it would still be there when I got service back. I could not take Visa MC etc. for a few hours, but realistically, when I did that on the phone, it went away when phone service was down. My cell from Sprint worked great, and if it would have lasted longer I would have transferred the company phones over. What did we do before cell phones? We waited till we saw each other, you know back in the old days when I walked to school in 3 feet of snow, uphill… both ways.