Bud Pierce, a showman he’s not

Bud Pierce takes questions after his talk to the Albany Chamber forum Wednesday.

Bud Pierce, M.D., the Republican governor for Oregon governor, makes a point of the fact that he’s not a politician. And it shows.

For 45 minutes Wednesday he talked to more than 200 people at the Albany Chamber of Commerce’s monthly forum. This was a business audience, and the candidate delivered a business-friendly message. You’d think his listeners would have been enthusiastic. But there was hardly any reaction to the message, delivered as though the candidate was reading from his platform. When it was over, the doctor got three or four seconds of polite applause.

The message was standard for Republicans, to the extent that I heard and understood it. Increase education funding. Teach students how to build things. Oregon needs more jobs, and job creation has to be done by the private sector. Regulations should be reasonable and help, not hinder, businesses in their work. Oregon taxes need reform and he would produce a plan. Spending has to be controlled. Forests should be managed better. Technology should be applied to help resource industries thrive. Prosperity must be driven by private business employment. State politics needs balance instead of the heavy dominance by Democrats that we’ve had. And so forth.

It’s all true, what he said. Pierce, a former Marine who became a cancer doctor practicing in Salem, is the kind of reasonable conservative many of us would like to see in the governor’s office. If only he could raise his voice now and then.

His opponent, Gov. Kate Brown, isn’t exactly Miss Showbiz either. But as a Democrat, she doesn’t have to be. (hh) 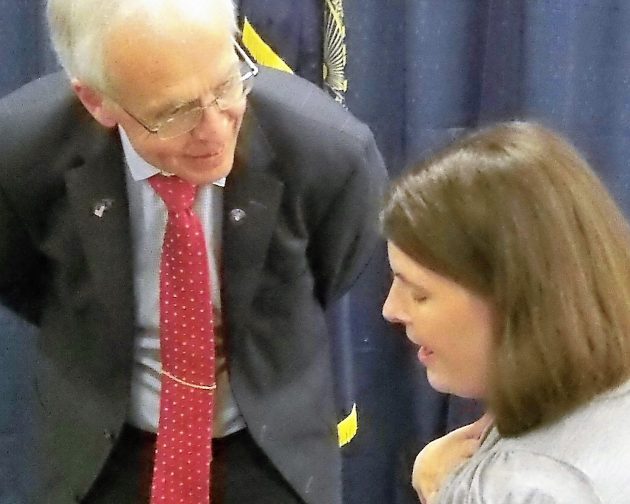 The candidate listens to a question after his talk in Albany Wednesday.


9 responses to “Bud Pierce, a showman he’s not”