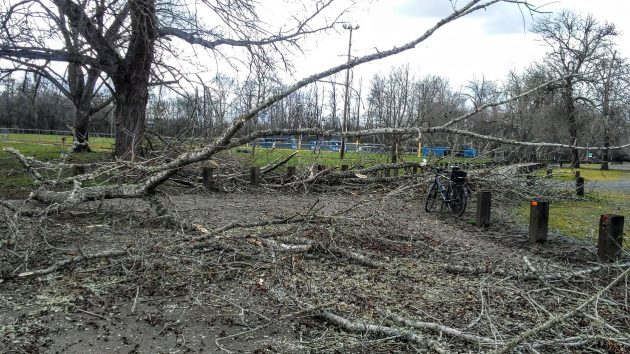 Bryant Park in Albany has been closed to motor traffic for weeks, so there was no need for hurry in clearing away the wreckage left by the ice storm of Saturday last.

Like everywhere else in the mid-valley, the riverside park was littered with broken trees and branches.

The road around the park would have been impassable for cars on Wednesday when I went through there. I was on the bike and could walk around the four or five places where trees or big limbs had fallen across he pavement.

The park remains accessible for people on foot.

As far as storm damage is concerned, other Albany parks got it worse. Rick Barnett of the parks department gave me this summary today:

“We just finished a bunch of park pruning, which helped us quite a bit but we still have some pretty substantial messes. The worst park by far is Draper followed by Takena and Timber Linn. Most of the rest are not too bad. The sheriff’s department has been wonderful and scheduled us a convict work crew every day as long as we need them.”

More from Barnett: “Some of the work we just can’t reach or don’t have the right tools to deal with. Our contractor will eventually be working on those issues. We assume on the top end that we will have $30,000 and quite a bit of staff time invested when it is all finished.

“We are hoping to be substantially done in parks and City right-of-ways in about a week.”

Compared to all that, the cleanup many of us face in our yards doesn’t seem that bad. As for that, Barnett says that if people have debris they need to get rid of, they can dump it on a pile in the middle parking lot at Timber Linn Park. (hh) 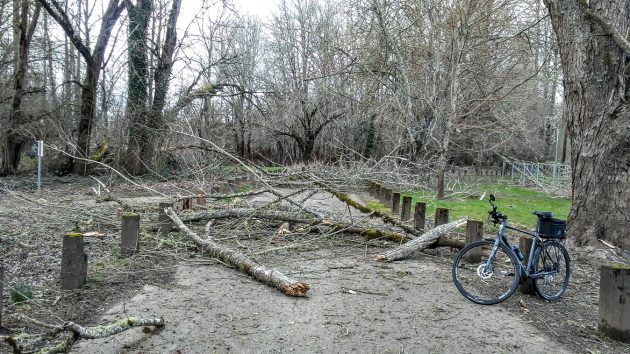 Getting around this spot at Bryant Park was easier than climbing over it would have been.

3 responses to “Storm debris at Bryant; other parks worse”