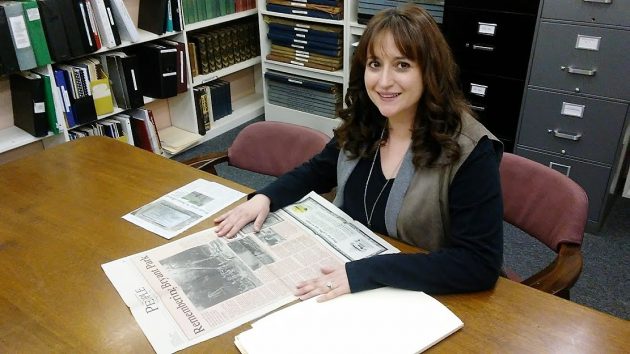 The archives of the Albany Regional Museum yielded these articles about Bryant Park. Staff member Erica Broad dug them out.

This is a story about how one thing leads to another, among them the spelling of the name of a park, a big anniversary, and the fount of local history that is the Albany Regional Museum.

It began with a comment by Steve Lundeberg, a colleague when we both worked at the Democrat-Herald. On Feb. 4, Steve remarked on this site, in response to a story about the spelling of Lyon Street, that he used to hear people call Bryant Park “Bryant’s Park” instead.

That reminded me of a plaque I had seen on the Third Avenue bridge across the Calapooia River. Here’s that plaque, and as you can see, the added “s” was part of the name as late as 1960. 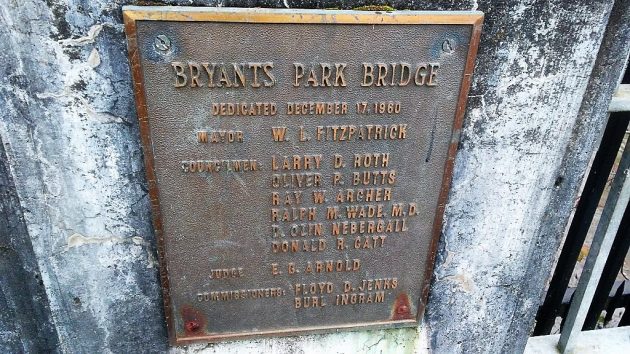 You will be struck by the absence of an apostrophe. Which might make sense if you assume the plaque writers wanted us to remember that the park for which the bridge was named was donated to the city of Albany not by one Bryant but by two, husband and wife, Hubbard and Adda Bryant.

People who stop at the park entrance at the foot of the bridge know this from another plaque, this one: 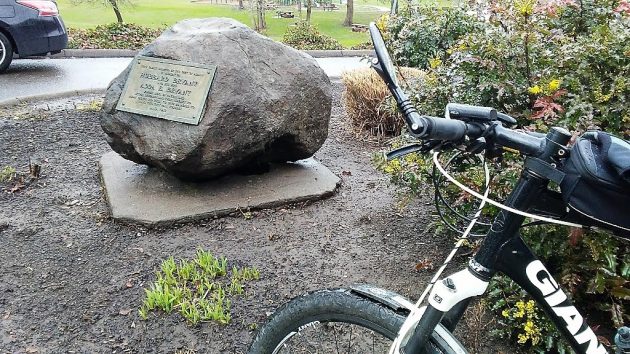 Which is worth a closer look, here: 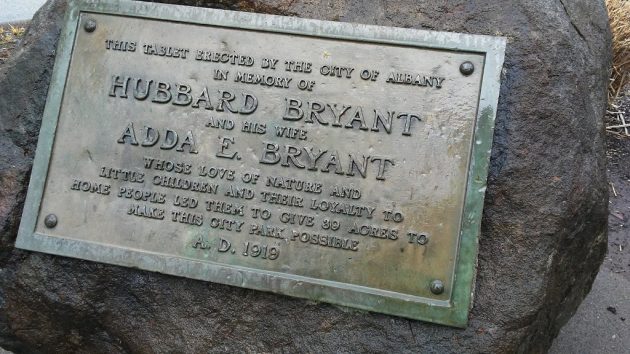 It’s a touching inscription, I thought. And I could not help but notice that it commemorates a wonderful gift to the “home people” that is now one century old. But the phrasing left me unsure whether 1919 was the year the park was donated or the year the plaque was placed in the donors’ memory.

That sent me to the Albany Regional Museum, where I asked Erica Broad, the museum’s coordinator of visitor and member services, what they had on the history of Bryant Park. In no time at all, she unearthed a folder with material on parks. And in it, there were two stories from the Democrat-Herald.

The most recent, from last May, was by Jennifer Moody, who covered City Hall and a long list of other exhausting beats until she recently left the paper for a more secure industry, Oregon State University. Her story pointed out that the city was stymied in any attempt to allow licensed beer sales at Bryant Park softball tournaments because of one of the conditions of the Bryants’ gift. The deed says that “sale or giving away of any intoxicating liquors shall forever be prohibited.”

The other story in the museum’s archives was also from the Democrat-Herald, written by Cathy Ingalls in August 1996. Cathy covered city government for a long time before retiring a few years ago and now volunteers as a museum board member and writer.  This piece, on what we used to call the “People” page, was prompted by the construction in June 1996 of a floating bridge across the Calapooia. This triggered, in various longtime Albany residents, memories of a pontoon bridge they used to cross as children to get to a fabled swimming hole.

The 1996 bridge was destroyed in the flooding of the following winter, and new restrictions intended to protect threatened fish runs have stymied any thoughts of replacing it since. Hard to see how a floating summertime footbridge that can be rolled up every winter could hurt any fish, so maybe cost and bother are the real reasons why the parks department has not pursued this  idea.

Cathy’s story called attention to another restriction Hubbard and Adda Bryant placed on their donation. No baseball or other athletic event was to be “tolerated” in the park on Sundays. She also reported that the place used to be called Bryant’s Park but that the possessive was dropped in the 1960s. Obviously this was after the city’s leaders dedicated the bridge in the first year of that memorable decade.

(Further research on the actual deed, prompted by Lundy’s question in the comments below, turned up no restriction on ballgames or other athletic events. It also showed that according to the deed, the place was to “be named and forever known as Bryant Park.”)

The big item for me was this nugget in the story: According to city records, it was on May 14, 1919, that the Bryants deeded the land for the park named after them.

So yes, we are indeed coming up on a full century since then. If nobody organizes any big thing to mark the date, the least we can do is go to Bryant Park that day and think kind thoughts of what Hubbard and Adda did for the children and “home people” of the town. As for me, I might take an extra loop around the park on my bike. (hh)


13 responses to “Bryant Park: It’s been a full century”