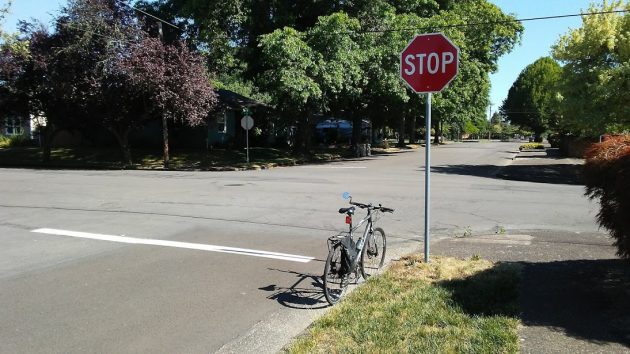 With no cross traffic, a bike rider won’t have to stop here under a law taking effect on Jan. 1.

It took a while for the legislative database to catch up, but today it showed that the governor signed a law change affecting bicyclists at stop signs in Albany and elsewhere in Oregon. The change takes effect this coming Jan. 1.

Friday — the 30th weekday after the legislature adjourned on June 30 — was the deadline for Gov. Kate Brown to sign or veto bills. According to Saturday’s version of an online list of more than 600 bills passed by the 2019 session, she didn’t do either with Senate Bill 998. But today, Aug. 12, the legislative website showed the bill as having been signed on Friday after all.

The law change adopts a form of the so-called Idaho Stop in Oregon. It says that cyclists may treat stop signs and flashing red lights as yield signs if there is no cross traffic bearing down on the intersection. They must still yield the right of way to vehicles or pedestrians, and the law adds new violations if they don’t.

As I’ve explained before, the new law changes little in how most cyclists behave. They usually slow down for a stop sign, checking for traffic, and then roll through if the coast is clear. But it removes the chance of being cited for doing so, as reportedly happens from time to time in Corvallis, though not in Albany as far as I know.

The change easily passed the state Senate, 21-8, on June 18. But a week later it barely squeaked through the House, 31-28. As long as the governor didn’t veto it, the bill would have become a law with or without her signature. It’s a minor bill, and Governor Brown might have wanted to just ignore it. But now it’s clear that she did not. (hh)

This story was edited on Aug. 12 when the bill was reported as signed.