Albany’s riverfront Dave Clark Trail now has to be the most brightly lit thoroughfare in town, as I think you’ll see if you click on the video and join me for a nighttime ride.

The contractor finished installing 80 poles and lights along the 1.2-mile path about two weeks ago, and I thought it was about time that I try them out. Which I did at about 10 o’clock Monday night.

First impression: Those LEDs are BRIGHT! (So much so that they dazzled me into confusing, at one point, right and left, as you’ll hear when you listen to the somewhat breathless narration.)

Nobody else was on the path at that hour, no walkers or strollers, no other people on bikes, no homeless people looking for a place to camp. No muggers either. Nobody.

The lights cover the entire length of the off-street portion of the trail, but there are none on the two-block extension along Front Avenue, which pretty well ensured that this video venture would end in the dark.

The city’s downtown urban renewal program, CARA, spent $298,008 on the lights in its continuing quest to prevent blight and bring more people downtown. Monday night it was just me, but come summer and balmy nights, I expect there will be many more. (hh) 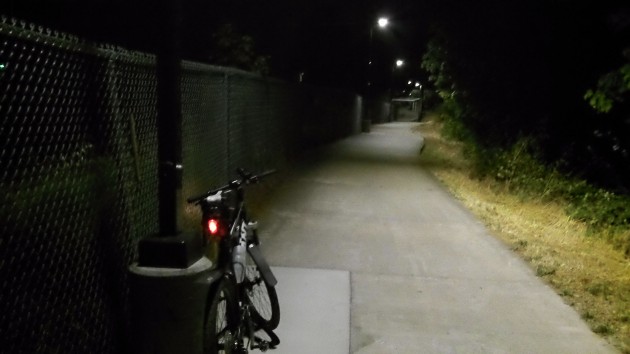 4 responses to “Bright night on the Dave Clark Trail”