Bridge repair: How much and who pays 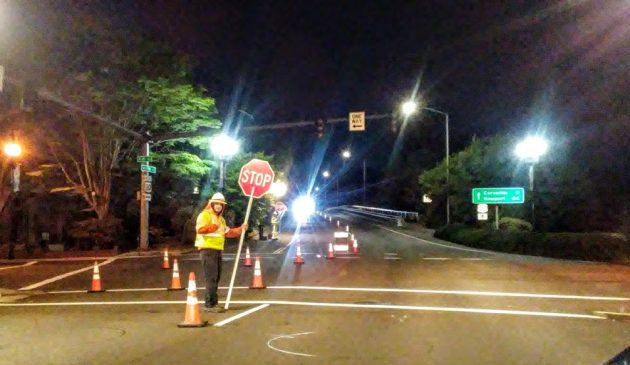 A flagger is posted at the Lyon Street bridge just after 10 p.m. on June 3.

Here’s an odd little fact about Albany’s Ellsworth Street Bridge, now undergoing nighttime repairs. If you ignore inflation — wish you could? — dealing with damaged overhead beams is costing more than was paid to build the bridge nearly a century ago.

An excavator being hauled by a truck hit three cross beams on the bridge on July 3, 2019. Now the bridge is closed at night until June 22 so a contractor can make repairs.

The cost of the contract? It’s $284,000, reports Angela Beers-Seydel, a spokeswoman for this region of ODOT. The total includes traffic control, which is extensive while southbound traffic is routed across the northbound Lyon Street bridge instead.

I found the bridge’s history summarized here, in a publication of the National Park Service’s Historic American Engineering Record. Among the details recounted there is a lawsuit by property owners who tried to prevent construction of the approach on the Albany side.

There were efforts to name the bridge for Sam Simpson, the poet who wrote “Beautiful Willamette,” or J.K. Weatherford, the Albany lawyer who did much to develop the state college in Corvallis. But the Highway Commission stuck with “Albany Bridge,” which was sufficient until the second Albany highway bridge was built one block to the east and opened in July 1971.

The work now going on is not, of course, the first repair. One month after it was finished, a telephone crew damaged the concrete handrail. It was fixed, but Bridge Engineer Conde McCullough complained about the “disturbing fact” that patch work never looks as good as the original.

No word on who paid for that patch job in the 1920s. But today, Beers-Seydel says, “All costs incurred by ODOT repairing the bridge are being charged to the responsible party’s insurance, and that includes the traffic control needed to close the bridge and detour traffic during repairs.” (hh)


2 responses to “Bridge repair: How much and who pays”