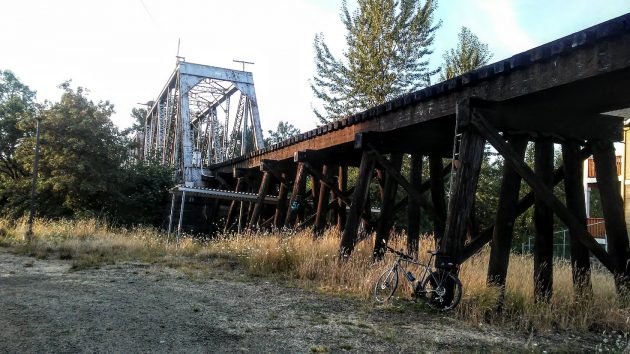 The Lafayette Street trestle leads to the Albany Railroad Bridge on July 26, as it has for more than a century.

Nobody is making a big deal of the 100th anniversary of the construction of the Albany railroad bridge across the Willamette River. That’s fitting, because when it was accomplished in 1921, the job made no splash in the papers of the time.

I paid attention to the age of the railroad bridge in a story back in January. If you missed it and care, you can read it here.

In the two Albany papers whose pages from 1921 are available on Newspapers.com, this bridge project is mentioned only twice, as far as I could find.

On Aug. 30, there’s one paragraph at the bottom of Page 4 of the Albany Democrat:

“Bridge Builder in Town,” it says. “W.H. Young and wife of Portland are spending a few days in Albany. Mr. Young is the builder and contractor in charge of the construction work on the new railroad bridge across the Willamette here. The old wooden bridge was the longest wooden railroad bridge in the world.”

That was it for the Democrat.

In the Evening Herald of Oct. 7, 1921, the bottom right corner of Page 1 looked like this: 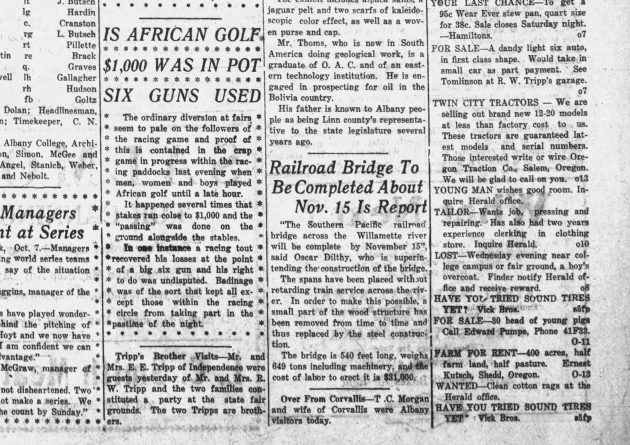 In case you can’t read it, the story quotes construction superintendent Oscar Dilthy that the Southern Pacific bridge across the river will be complete by Nov. 15.

It reports the fascinating detail that the spans of the new steel bridge were put in place without disrupting train service on the line. “To make this possible, a small part of the wood structure has been removed from time to time and thus replaced by the steel construction.”

The wooden railroad bridge mentioned by the papers had been around since at least 1888. Like the steel structure that replaced it, it was a swing bridge that could be opened to let paddlewheel steamers go through.

If the new bridge was completed by the middle of November as the construction supervisor had expected, there’s nothing about it in the papers of that month. Maybe that’s because it was not a new crossing but just a replacement of the wooden spans that had been there for a long time. (hh) 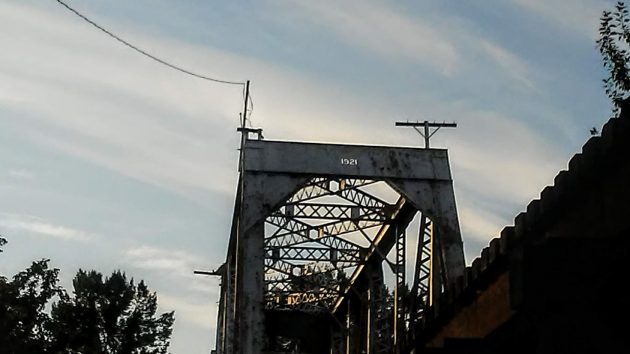 The builders thought the completion of the job was important enough to inscribe the year it was done high up on the bridge.


5 responses to “Bridge completed 100 years ago: No big deal”