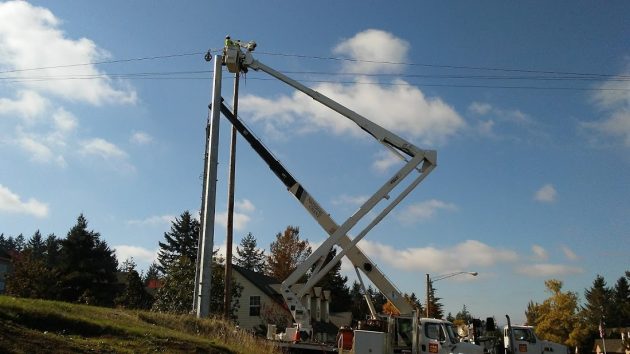 Two workers in a bucket Thursday prepare to untie lines from an old wooden pole on Sarah Avenue before completing its steel replacement, the top segment of which is still hanging from the crane.

Contractors for the Bonneville Power Administration have been working in North Albany on the final stage of a two-year project to replace power poles on two high-tension transmission lines from Salem to the Albany substation near Hazelwood Park.

Councilman Dick Olsen wondered about the activity Wednesday, saying a North Albany constituent had asked him what was going on.

On Thursday I stopped at the corner of Northwest Penny Lane and Sarah Avenue. A crew for PAR Electric Contractors was using a massive crane and a high-ranging bucket to set up a steel monopole to replace a single wooden pole and shift the wires to the replacement.

At another site in the BPA right-of-way, down the slope on Gibson Hill Road, a worker told me they had a few more weeks to go before the job of replacing all the poles would be complete.

The BPA laid out details of the work in an environmental assessment that’s available online. You can read it here.

The federal power marketing agency wanted to replace all the wooden poles on the two 115-kilovolt transmission lines from Salem to Albany. The No. 1 line runs for 24 miles down the east side of the Willamette River and then crosses the river into North Albany. The 28-mile No. 2 line runs on the west side. Both cross the Willamette in the area of Bowers Rock State Park before running together to the substation off Queen Avenue.

On the No. 1 line now nearing the finish, BPA expected to install 162 new wooden poles and 75 steel monopoles. In North Albany, it’s installing the steel towers, which have an average height of 74 feet.

Segments of the steel towers have been stored on a vacant lot at North Albany Road and Hickory Street, leaving more than one passerby wondering what all those pipes were for. 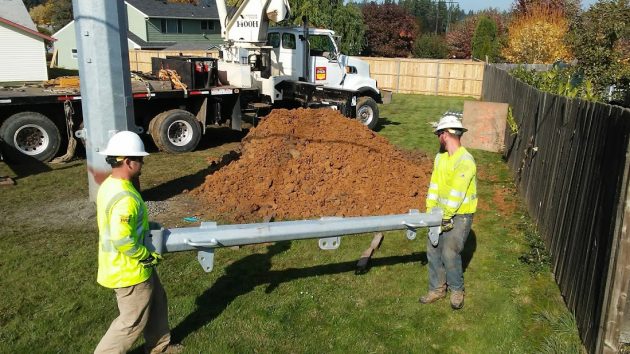 These men carry what looks like the very tip of the steel transmission tower they were installing off Gibson Hill Road on Thursday.