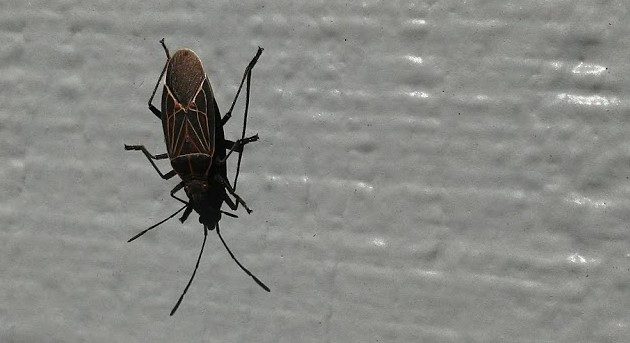 A boxelder bug seems to enjoy the warmth on the siding of a North Albany house on a recent sunny day.

Springtime is good news in many respects, not the least of which is that it also means the beginning of the end of the annual visitation by swarms of boxelder bugs.

“The boxelder bug frequently becomes a nuisance pest around homes and buildings…” So begins a Penn State Extension tract on insect advice. A nuisance? No kidding.

But there’s good news for the owners of mid-valley sites that have been bugged by Boisea trivittata. Yes, the little things are nuisance pests, the National Pesticide Information Center at Oregon State admits. But: “They do not sting or transmit disease, and are generally not known to bite, though there are rare reports of defensive biting.”

Around this time of year, the main good news is that after overwintering wherever they can get inside and out of the cold, they are about to leave again and buzz back to the maples — or boxelders if there are any — on which they feed and lay their eggs in the spring and summer.

Then, in the fall they may be back, of course, swarming on surfaces warmed by the sun. To keep them from getting any further, we’re supposed to seal all the cracks in the walls. A good idea, obviously, but chances are we’ll miss a crevice or two. And the boxelders will probably find the cracks we missed.

One way to kill lots of them before they get inside is to spray them with soapy water while they’re massing on the outside walls. It does work, actually. And if they do get inside, keep a vacuum ready to scoop them up.

The Penn State publication says that “this insect species is distributed throughout eastern United States west to Nevada.” Here’s news for the people at Penn State: They are well established in Oregon too, and have been for many years. (hh)


6 responses to “Boxelder bug season is nearing its end”