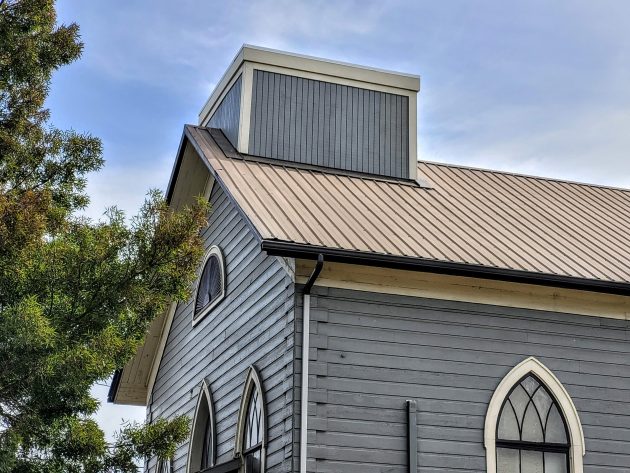 Here’s the steeple base, already repaired on Sept. 17, about which the Landmarks Commission will hold a public hearing on Oct. 5.

Eventually — maybe one of these years — the oldest former church building in Albany might again get a steeple. But in the meantime it has only the base on which, once upon a time, its steeple sat.

The base looks like a box plopped on the roof of the building at 238 Third Ave. S.E. Because the base had deteriorated and was letting in water, the building’s owner, CHANCE Recovery, has repaired it.

The Albany Community Development Department determined that this was not a mere repair but an alteration of an historic building that needed a public hearing before the city’s Landmarks Commission.

The hearing, scheduled at 6 p.m. Oct. 5 at City Hall, will be for the “historic review of exterior alterations for the replacement of siding, trim and fascia on the steeple base of a commercial building.”

The building dates from 1875 and is listed on Albany’s inventory of historic properties as the Methodist Episcopal Church, constructed in the “rural vernacular” style.

In recent years it was the headquarters of the regional CHANCE organization. Now, according to the application for historic review, it serves as a temporary kitchen for the Second Chance homeless shelter on Jackson Street, and as a clothing and food closet for the poor and homeless.

A former director of CHANCE, still on the job at the time, told me a couple of years ago of plans to put a steeple back on the building eventually. This year, two other CHANCE representatives made the same point to the Landmarks Commission.

In its application for the repairs of the base, CHANCE said the materials to be used would be the same kind as those being replaced.

I don’t know when, in the distant past, the steeple fell off or was taken down, or whether a new steeple will ever go back on that building. But looking at that box alone, it’s hard to see much of historic interest, especially since it sits on a presumably nonhistoric steel roof. (hh) 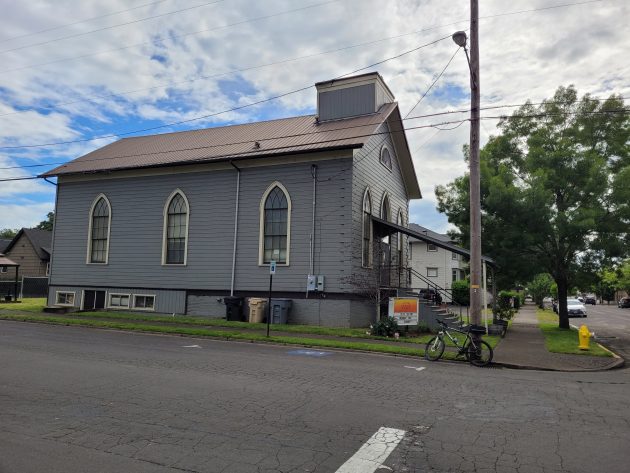 
16 responses to “Box on the roof: City sets public hearing”