Bowers Rock: Time for a look and an update 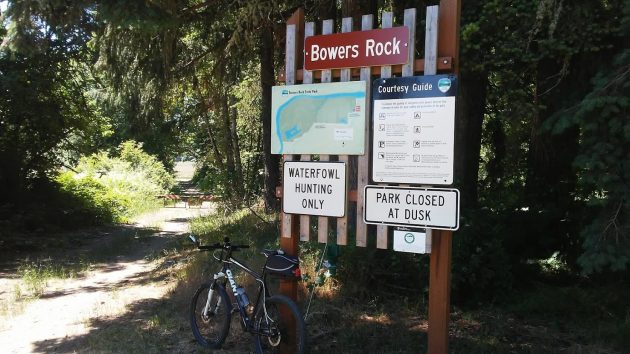 Once you’re past the gate, you’re greeted by the familiar sign, which looks the same as last fall.

With time to spare on Tuesday afternoon, I turned off my favorite bike route to go down the private road that gives access to Bowers Rock State Park. There was no particular reason except that I had not been there since last November.

I wish I could report that there’s been progress in my quest to have state parks, or somebody, make this state park more accessible to the public. But so far, there’s no word on that particular point.

Last year, the state parks department, the Calapooia Watershed Council and others completed a $1.2 million project to restore flood channels and other features in the 568-acre tract. They also improved the internal roads, or pathways.

The land lies on a bend in the Willamette River a couple of miles west of Albany. The state acquired it in the 1970s as part of the Willamette Greenway initiative during the McCall administration. Part of the acreage had been a gravel mine, and other parts are under water during wet winters.

In November, District Manager Sarah Steele of  the Oregon Department of Parks and Recreation told me her agency would turn to the public access issue next. She mentioned signage and adequate parking.

She said at the time she had been in contact with Linn County and neighbors of the park, and she sounded hopeful that work on these issues would start this year.

I reached out to Steele about a progress report, and I’ll report it when it comes. (hh)


5 responses to “Bowers Rock: Time for a look and an update”