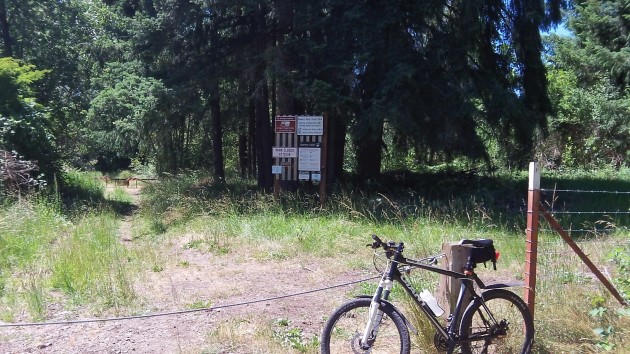 The entrance to Bowers Rock State Park at the end of Bryant Way.

The public does have the right to access Bowers Rock State Park via Bryant Way, according to the Oregon Department of Parks and Recreation.

The public’s right has been disputed by an — apparently — privately installed sign at Bryant Way and Bryant Drive. “No Public Access,” the sign proclaims. And in case that’s not enough, it adds: “Violators will be prosecuted.”

As far as I know, no one has been ticketed for getting to the undeveloped park at the west end of Bryant Way. The reason may be a deed record in the archives of the Linn County Clerk. The document was filed on July 5, 1917. It says that H. and Adda E. Bryant sold, for $10, to five other members of the Bryant family “a right of way for ingress and egress over a strip of land thirty feet wide, being fifteen feet on each side of the following described line, to-wit …”

There follows a lengthy legal description. The document makes clear that this right of ingress and egress stayed with the properties’ subsequent owners “forever.” It was this right, or easement, that passed to the state when it acquired the properties to which it is attached.

“While we do not have any public facilities or accommodations for visitors,” spokesman Chris Havel of the parks department told me in an email, “we believe the state’s easement on Bryant Way includes public access to the Bowers Rock property. There is no designated public parking in this area — the easement is for entering and leaving the property only, and does not address parking along or at the end of Bryant Way.”

He added, “Since this isn’t a developed piece of property, we don’t promote its use, and when people do ask about it, we remind them it’s important to respect the property rights of our neighbors around the property. Goes without saying, I suppose.”

Respecting the rights of neighbors is crucial, of course. But as long as people stay on that strip of land 30 feet wide dedicated to ingress and egress in 1917, I don’t think they need to worry when they walk or ride a bike to the entrance of that state park. It might help if the parks department got the county to put up signage to that effect on Bryant Drive, a county road. (hh)