Bowers Rock State Park: How big it is – Hasso Hering

Bowers Rock State Park: How big it is 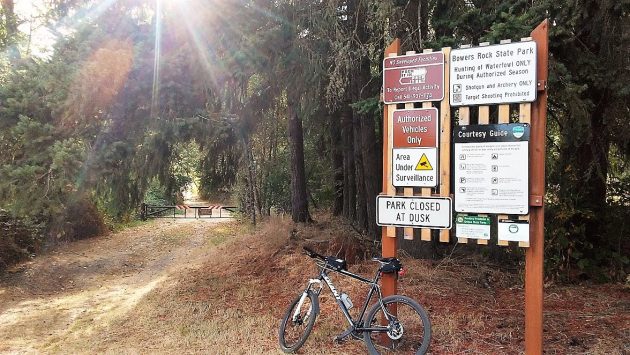 At the entrance to Bowers Rock State Park, one of the signs mentions surveillance.

So exactly how big is Bowers Rock State Park, the natural wonderland near Albany I wrote about last week? And is there really camera surveillance of people who go in and out?

Over the years, published materials have listed different acreages for Bowers Rock, ranging from around 500 to more than 700 acres. When I talked with state park officials last week, the exact number was not readily at hand, so I resorted to a weasel phrase,”several hundred acres.”

But Scott Youngblood, park ranger for the Willamette River Greenway, promised to dig out the correct number. He did, and this morning he sent word. Bowers Rock contains 568 acres.

Another thing I had wondered about: At the entrance, past the end of Bryant Way, there are a bunch of signs. One of them lets people now they are “under surveillance.” On a past visit, and again last week, I could not spot a camera.

But Youngblood says that indeed, a camera is there whether I can see it or not. And it lets him know in real time who comes and goes past the entrance. It also gives him a count. In July, he told me, the camera recorded about 90 people. Almost all of them, he says, carried fishing poles.

Only about 90 visitors for a whole month in mid-summer? It’s a measure of how the lack of easy access, along with no public facilities of any kind, has held down awareness and use of what could be a marvelous recreational asset. So it’s encouraging that, as I reported last week, the parks department’s new district manager, Sarah Steele, is committed to help Bowers Rock take the place in the state park system that it deserves. (hh)

11 responses to “Bowers Rock State Park: How big it is”