Sunshine and dry weather meant it was time for my annual visit to Bowers Rock State Park. The park is a good place to see natural open space along the Willamette River. And it’s still hard to get to because there’s no easy place to park and the only access road tries to keep the public out.

The park’s 568 acres are undeveloped, though some of the land appears to be cultivated. But it has a proper park entrance with the usual signage at the western end of Bryant Way.

The Oregon Parks Department says the public has a right to reach the park via Bryant Way, even though two signs say it’s a private road, there is no public access and violators will be prosecuted. (Within the past year, someone vandalized those stay-out signs with spray paint, a stupid thing to do.) 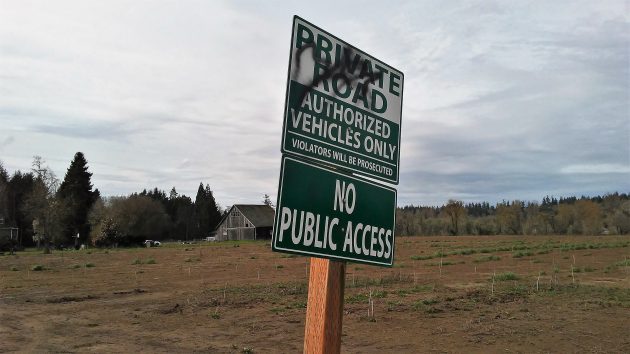 One of the private road signs on Bryant Way, the way it looked in March.

Over the years, Linn County Commissioner Will Tucker and Brian Carroll, the county parks director, have tried to address the access problem.

In a February 2015 letter to the Oregon Parks Department, Carroll proposed a transfer of the park from the state to the county. “We believe,” he wrote, “a transfer would be in the best long term interests of Oregonians and would be mutually beneficial to both agencies in terms of protection, management and improved access to this recreation open space area.”

Carroll said the county would work with neighbors to address their concerns about access and security. The county, he added, would manage the park as open space with minimal development to complement trail access. As for security concerns, the county would provide on-site staffing to deal wth them.

State Parks responded in March 2015 that the county proposal aligned with the department’s objectives, and the staff would study a “jurisdictional change in either ownership or operational responsibility for the property.”

But that’s where the matter rested. When I contacted State Parks last week. I heard that a regional manager just then had planned to get in touch with the county. The results of that contact, if it happened, I don’t yet know.

As things stand, people  occasionally visit the park by walking in after parking on the shoulders of the intersection of Bryant Way and Bryant Drive. From my perspective, it’s more convenient to use the bike. (hh) 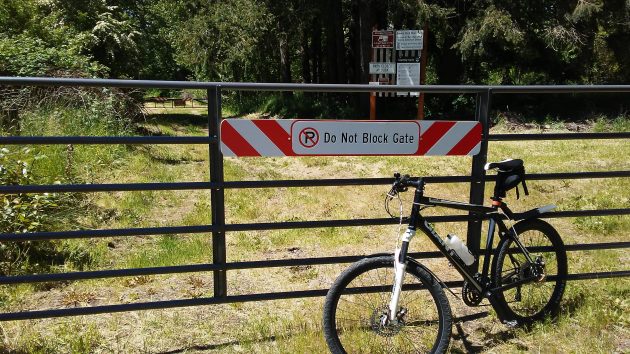 This gate is new, but there’s a gap on the side for walkers and cyclists to get through. 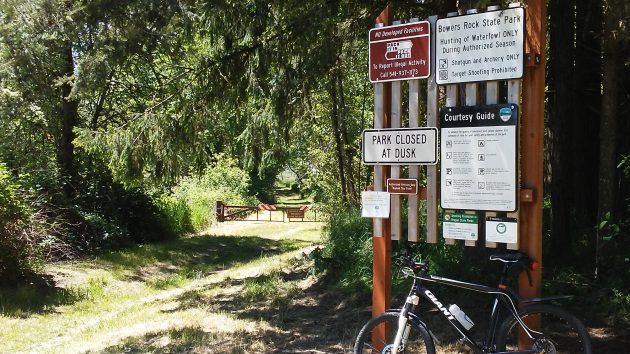 The entrance to Bowers Rock State Park last week. You can get there on foot or on a bike.