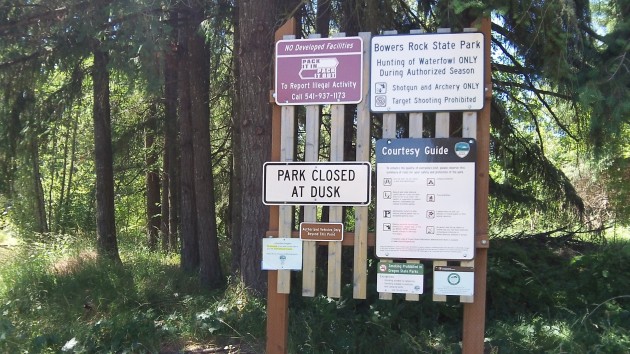 You’re not supposed to get to see this sign, because the private road leading to it says “No Public Access” and “Violators will be prosecuted.”

Nothing makes clearer the broken promises of Bowers Rock State Park than one little notice on the array of signs at the park entrance, an entrance from which nearby land owners evidently want the public barred.

The notice is from the National Park Service of the U.S. Department of Interior. It says Bowers Rock benefited from a federal program intended to “provide outdoor recreation and open spaces for all.” If the feds took a look now, they might want their money back.

The entrance to Bowers Rock, an undeveloped expanse of several hundred acres on the Willamette River west of Albany, is at the west end of Bryant Way. The state has an easement to use the private road and says the public can use it too. Nearby owners may think otherwise, because a couple of years ago a sign appeared on Bryant Way: 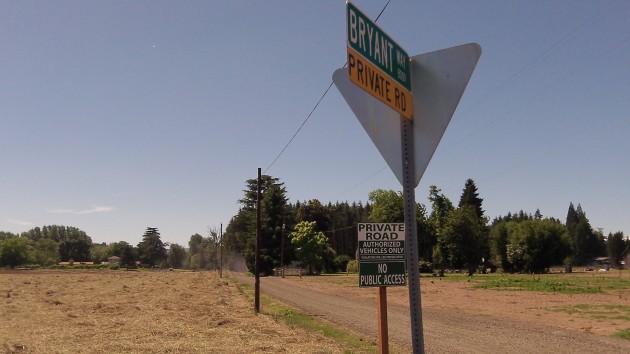 I ignored the threat of prosecution and rode my bike to the end of the lane. That’s where the state park sign is. And this is the little addition: 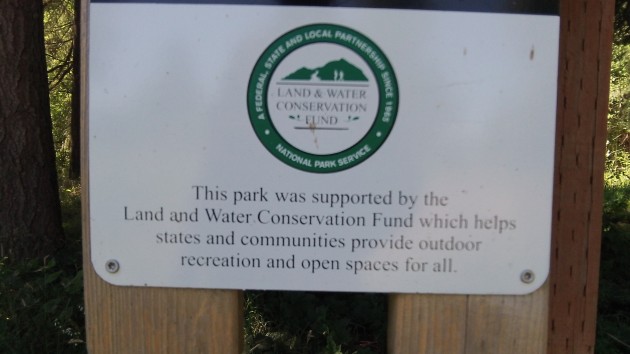 Planning for Bowers Rock began more than 42 years ago, about the time the state acquired the site in line with a legislative mandate. It was in December 1973 that the state parks and recreation staff compiled proposals for a master plan for the 893-acre area so it could meet its stated purpose, which was to meet the “regional recreation needs” of the Albany-Corvallis area while also preserving its “natural values for future generations.

The plan proposed an entrance from Bryant Drive at the southeast corner of the park, not Bryant Way at the northeast corner. It showed a road leading to four or five parking areas, various picnic spots, a system of trails, pond improvements for warm-water fishing, a service yard and park manager’s residence, and a boat ramp on the Willamette.

None of it exists, public access remains in doubt and now is even met by veiled threats.

Asked about this, various state and local officials have told me over the years they’d like the public to have more access and would like to work something out while meeting the concerns of neighbors about rowdyism and other problems. But as near as I can see, nothing has been done. (hh)