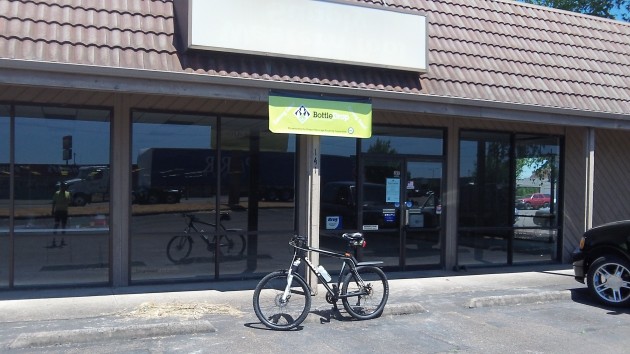 There’s remodeling going on inside the future redemption center on Santiam Highway S.E.

Albany’s bottle and can redemption center has an Aug. 20 target date to open for business, and “so far we are on track,”  Cherilyn Bertges of the Oregon Beverage Recycling Cooperative says. Why should anyone care? Because sooner or later, the Oregon Bottle Bill will demand recycling of more types of beverage containers, and the availability of redemption centers is a factor in when that decision gets made.

On June 19 the Recycling Cooperative won approval from the Oregon Liquor Control Commission to open the first Albany redemption center or “BottleDrop” at 2141 Santiam Highway S.E., across Santiam from Bi-Mart and Fred Meyer. Major beverage retailers in the city plan to quit accepting empties when the center opens.

Redemption centers were one of the elements of a law enacted in 2011 to expand the scope of the Oregon deposit law. When it was first enacted in 1971, the law required deposits on soft drink and beer containers. Water bottles were added in 2009. Now, consumers pay a 5-cent deposit on beer, soft drinks, water and flavored water in metal, plastic and glass containers of 3 liters or less. But eventually, the state Bottle Bill website reminds us all, the 2011 change :will  expand types of containers requiring deposits to include juices, teas, coffees and sports drinks and any other beverage intended for human consumption except distilled liquor, wine, dairy and infant formula.

The added containers will require a deposit on Jan. 1, 2018, “or one year after OLCC determines that at least 60 percent of beverage containers are returned to redemption centers (instead of stores), whichever comes first.” Also, the 2011 act says the deposit doubles to 10 cents per container “after the OLCC determines that, in each of two previous years, the number of containers returned was less than 80 percent of total number of beer, soft drink and water containers sold.”

The state Bottle Bill site explains: “OLCC cannot make this determination, under the law, prior to Jan. 1, 2016, so the earliest the refund value could rise to 10 cents would be Jan.1, 2017.”

It’s because of the law’s intent of requiring deposits for more types of containers that legislators allowed redemption centers. The goal was to relieve retailers of handling and storing tons of additional bottles and cans. Several cities in Oregon already have them. Now Albany is getting one. Bertges says the cooperative eventually hopes to have one in Corvallis too, but there are no current plans. The next ones are planned for Grants Pass and northeast Salem. (hh)

6 responses to ““BottleDrop:” Why it matters”