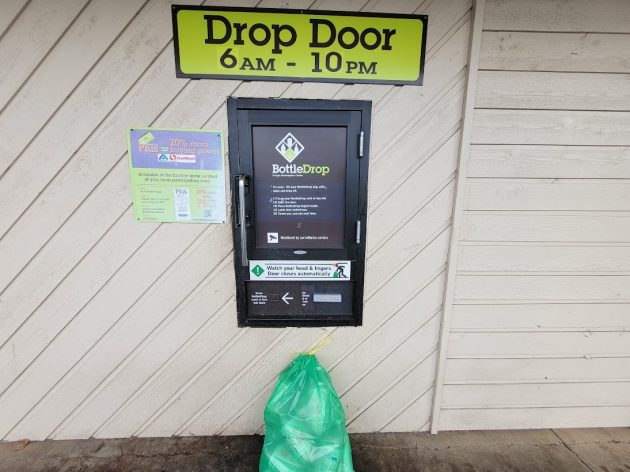 Outside the drop door at the Albany Bottle Drop on Thursday afternoon.

Following up on last week’s story about the Albany Bottle Drop, and more generally about the Oregon Bottle Bill, there’s something I’d like to amend.

The Dec. 30 story was prompted by the Oregon Beverage Recycling Cooperative’s announcement of changes in its terms and conditions taking effect Jan 1.

The main change was in the processing fee charged for counting containers that we deliver to the Bottle Drops in those green bags. It’s an increase for those people who fill the bags with as many little cans and bottles as will fit.

But for our household, whose bags average 20 plastic 2-liter empties, like the one in the photo, it’s a decrease from 40 cents, the prior flat fee, to an average of 16 cents a bag.

Another change is a new requirement to use your own account card to open the drop door so that, the cooperative said, they can associate the bags you leave with your account in case there’s a problem.

I made a crack about that and wondered what kind of problems there could possibly be. How could they link a bag to a customer, I wondered, unless they rigged a camera that snapped photos of whoever opened the door, snapshots that could then be linked to the account card used to open it.

Well, guess what: There is a camera that does exactly that. The story got me an email and a call from Eric Chambers of the cooperative, based in the Portland area. And he explained, using me as an example, how problems can be checked.

On my account, they did not see that I had gotten a credit for returned empties for some time. So they went to the record created by the camera and the opening of the door, and they discovered that I had indeed dropped a bag on a particular day late in December.

“You were wearing a hat,” Chambers told me.

This discovery would have caused the cooperative to try to determine why the system did not show a corresponding credit for that bag. As it turned out, no investigation was required because just then the credit did show up.

I had not seen the camera before. On Thursday I looked for it, and it’s right there, above the drop door.

You can look at this setup as an example of the sophisticated technical capability of the cooperative’s container-refund system. Or you can fret about yet another step toward the all-seeing surveillance society of “1984.”

Either way, working in that back room with tons of empties can’t be a lot of fun. So when you stuff a bag through that door, look up and give them a friendly smile. (hh) 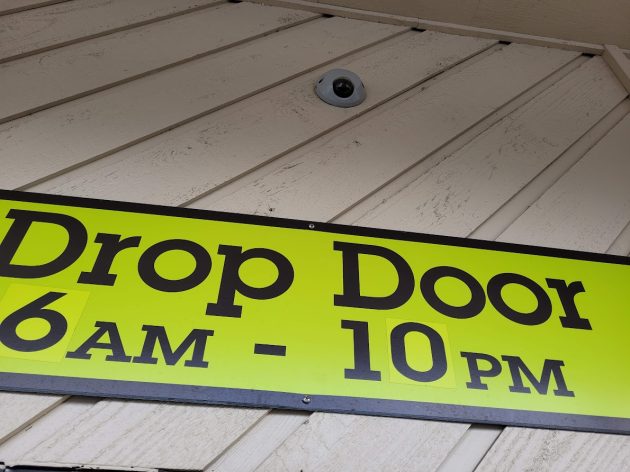 There’s that little camera, up on the wall.


4 responses to “Bottle Drop follow: Look up and smile”