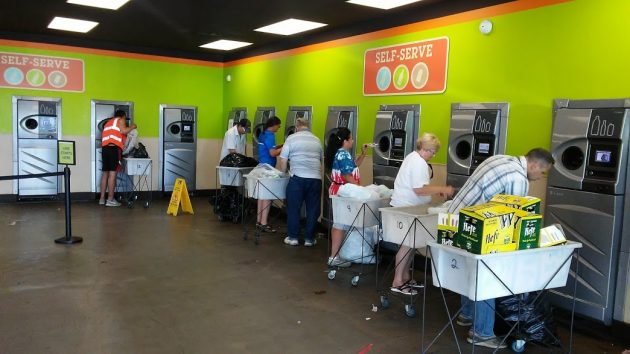 Inside the Albany redemption center for bottles and cans on Santiam Boulevard one day in July.ill

So how do you like Oregon’s Bottle Bill now? Now, that the law covers so many more beverages in addition to water, soft drinks and beer?

Seems like the Albany Bottle Drop, the redemption center of the Oregon Beverage Recycling Cooperative, is almost always busy. The busier it gets, the more people might wonder about the wisdom of centralizing the return of pretty much all beverage bottles and cans in one spot. That happened in August 2015.

At first it seemed like a good idea. No more standing at drafty, smelly and often balky machines outside the various supermarkets and stores. But as more items have been added to the deposit requirement, visiting the central redemption center may be losing some of its initial appeal. Now it means  feeding a machine  and breathing beer fumes indoors.

You can get around it by signing up for bagging your empties and dropping the bags down a chute any time you go by there. No standing around, but they charge you something for the bags.

Speaking of which, the OLCC has just issued a reminder: If you still have empties on which the deposit was a nickel, you must return them by Sept. 30 in order to get the refund, which now is a dime since the deposit went up to 10 cents in April 2017. After this month, no more refunds on any 5-cent-deposit items. But the OLCC points out you can till recycle them.

Which brings up an old point. Why don’t we just drop all this deposit-and-return rigmarole and put the empties into the recycling bins that just about everybody has? It would save the hassle of storing those things until the bags are full and then running them to the redemption center, which is a separate trip unless you have other business in that part of town.

Of course, if the hassle bothers you, there’s an alternative: Quit buying all that stuff in bottles and cans. Drink tap water or brew your own. (hh)

17 responses to “Bottle Bill: A deadline on old cans”