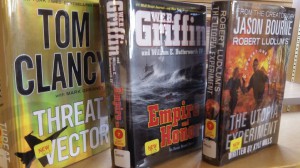 Clancy, Griffin and Ludlum? Not quite.

The late Robert B. Parker wrote dozens of splendid detective stories, many of them centered on Boston private eye Spenser. He also wrote three notable westerns. The other day I spotted a new Parker western at the downtown Albany library. How could that be, I briefly wondered, since Mr. Parker died  in 2010.

Turns out that the dust jacket was misleading at first glance. “Robert B. Parker’s Ironhorse,” it said in big letters. The actual author, Robert Knott, was in much smaller type. The novel featured the same main characters as the other three, Virgil Cole and Everett Hitch, made famous by the movie “Appaloosa.” And it was an entertaining read. But it was not quite the same as genuine Parker.

You may have noticed that this has become common, this practice of putting out new titles under the names of popular writers who have quit writing, enlisted helpers or died. Somebody, for example, is still milking the Bourne phenomenon created by Robert Ludlum. Tom Clancy’s name, too, appears on books written at least partly by somebody else.

I suppose there’s nothing wrong with exploiting commercial success. Any business based on the written word needs all the help it can get. But you’d think that authors good enough to emulate Parker or the other big names in popular fiction would want to think up characters and story lines of their own. (hh)

Nancy Sturm responds (via Facebook):  I quit reading Robert B. Parker when other names started to appear on the dust jackets.  Per Amazon, there have been four.