Bond issue: The facts are enough 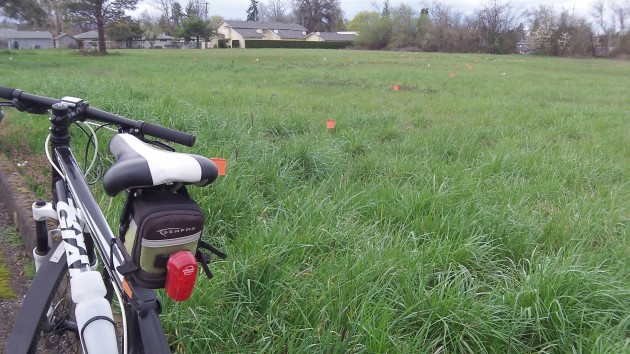 The site of the planned police station. (See those little flags in the grass? What are they for?)

Poetic license is helpful sometimes, but we should avoid it when we can easily rely on facts alone. And no, don’t call the election police to warn them that ineligible voters plan to cast ballots for the Albany bond issue in the election that will end May 19.

The campaign committee for the $18 million bond issue, which would raise most of the money to build a new police headquarters and downtown fire station, provided copy for the Benton County Voters’ Pamphlet. One entry reads: “Join us in voting yes for our community’s public safety facilities.” That invitation is followed by a list of people including several who can’t vote on this issue at all because they don’t reside inside the Albany city limits.

Among others, the list names state Sen. Sara Gelser, who lives in Corvallis; Linn County Sheriff Bruce Riley, who lived in Tangent at last report; and former Sen Frank Morse and, alas, me, who both live outside the Albany limits in North Albany. (Citizens who pay taxes in a jurisdiction because they own property in it should be able to vote on tax issues, but that’s an issue for another day.)

All the people and organizations on the list do in fact support the bond issue, but the introductory sentence implies something that is legally impossible.

Also in the pamphlet, Citizens for a Safer Albany, the campaign commitee for the bond issue, declares that “a ‘YES’ vote WILL DECREASE your current TAX RATE.” Sorry, but not really, despite the capital letters, as pointed out to me by Tom Cordier.

Some existing city debt will be paid off this summer, and the 37-cent tax rate to pay it off will then disappear, whether the police-fire bonds are approved or  not. And if they are approved, the rate will go up again by an estimated 29 cents. That’s a nice trade, but to say that approval of the bonds will lower the rate is similar to claiming you “save” $11,000 when you pay $36,000 for a truck whose price tag started at $47,000. You get a nice truck, but you’re still out $36,000, more if you buy it on time.

The police-fire bonds are a good deal because they make possible two construction projects that are crucial to the work the police and fire departments do for the people they serve. That’s why I support them, and why I won’t mind paying an extra 29 cents a thousand in city taxes even though I can’t say so with a ballot. (hh)


17 responses to “Bond issue: The facts are enough”