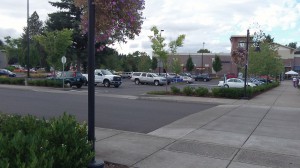 When I looked for the saxophonist here on Thursday night, he was gone. Hope nobody ran him off.

In a Facebook exchange about people with cardboard signs begging at street corners, somebody had a complaint. “Have you seen the man in North Albany Village playing saxophone (illegally),” the person wanted to know. Yes, I have, and I’ve slipped a couple of bucks into his sax case lying on the sidewalk.

I don’t think there’s anything illegal about making music, softly, out in the open. This guy is no beggar. He works for a living. His playing the sax sounds to me like a recently acquired skill, which suggests that he applied himself.

What I heard were mostly improvisations and disconnected riffs. So I asked him if he played familiar tunes. Sure, he said, he’s even had requests. O yeah? Like what? Somebody asked him to play “Danny Boy,” he said.

The Facebook critic may be somebody with time on her hands. She reported watching for three hours one day and counting 55 people handing the man money, she assumed at least a dollar each. “$55 in 3 hours,” she harrumphed. “That isn’t too bad. $18 per hour. That’s more than I make in my part-time job. And I can seem to get clothes on my kids and insurance on my car and food in my mouth. It’s all about CHOICES!”

Right. So don’t blame a guy in a big parking lot, who’s not bothering anybody, for having learned to play the sax and earning a few bucks. (hh)

From Jim Clausen, via Facebook: Good for him! All those years of practice finally paying off! I went to NY many years ago and some guy was sitting on a planter playing his sax. It echoed loudly throughout the tall buildings. I was impressed! Passersby offered change and bills for the entertainment. It’s a shame that some people can’t see beyond their noses. They miss the beauty of people putting themselves out there for all to see…