Blocking our view: Talk about bushes 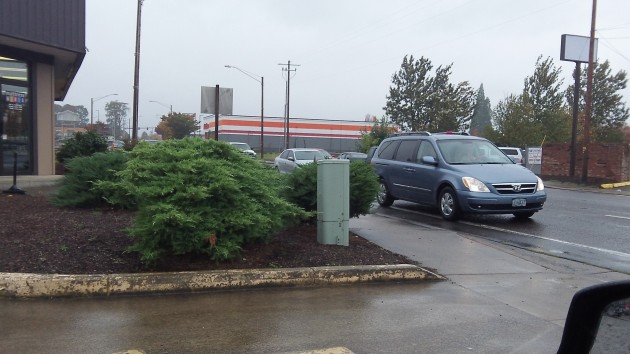 Traffic comes barreling down Ninth at Periwinkle Plaza, but you can barely see it.

On Monday and Tuesday, Albany city employees plan to sweep the town of temporary signs placed in the right of way along major streets. Some of us think those signs, most of them little A-frames, are less of an annoyance than the landscaping on many corners that keeps us from seeing what’s coming down the street.

The sign removal is an occasional operation prompted first of all by the city code, which bars private signs in the public right of way, and secondly by concerns that the signs obscure the sight lines of drivers. Those sign boards could be the indirect cause of crashes. But I think that latter concern is mostly theoretical. I can’t recall an instance where a sign kept me from getting a good look at traffic coming down the street.

Far more often, especially downtown, it is cars and especially pickups and vans parked on the curb that keep me from seeing more than a few feet down the streets to my left and right.

And then there’s landscaping that’s blocking the view. On most business lots, landscaping is required by the city’s development code. And maybe the code says something about plantings having to be low so drivers can see above them. The trouble is that plants grow, and sometimes they grow taller than is good for convenience and  traffic safety.

I don’t expect city crews to scour the corners on public driveways and intersections with pruners in hand. But while they’re out there removing offending signs from the public right of way along major thoroughfares, maybe they could make a note of sight-obscuring vegetation too and let property owners know. (And by the way, the city is not confiscating any signs. Owners can pick them up at the city shops on Waverly N.E. until Nov. 25.)  (hh)


4 responses to “Blocking our view: Talk about bushes”