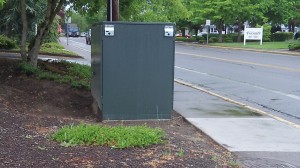 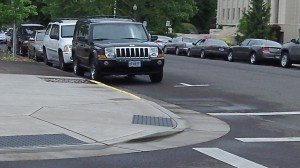 Ever notice that street and traffic planners expect us to be able to see through objects and around corners? That’s the feeling you get driving around Albany and, I think, many other small towns with mostly narrow streets. Here’s an example of some kind of big utility box placed next to one of the driveways of the former city library, which now houses the Social Security office, an office of dermatologists and the KGAL Albany studio. Also, here’s a view of the corner of Ferry Street and Fourth Avenue downtown. If you’re driving a low-slung passenger car, it’s hard for you to see what’s coming down the cross street.

There are lots of similar examples around town, and worse ones too. I’m sure the city has a slew of regulations about sight clearances at corners. But with parked vehicles on the curb, and with walls, fences and sometimes hedges and bushes crowding the street, drivers waiting at stop signs often can’t see well enough whether it’s safe to go ahead.

So sometimes we just have to take a chance and hope for the best. Or, better yet, we can ask the local traffic authorities to survey the city and see which sight clearances could or should be improved. (hh)