Bird scooters: Learn how and where to park 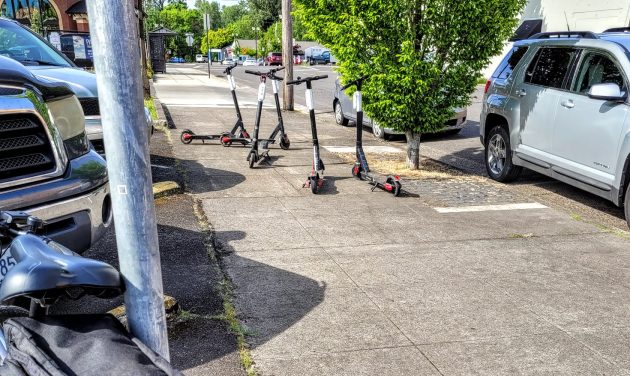 Five Birds on the sidewalk outside the downtown Albany post office on Tuesday afternoon.

The Bird scooters are still in their first month of being available in Albany, and there may be a learning curve yet to be climbed.

One of the concerns someone mentioned when the city council and others first talked about this was that users would leave the electric scooters littering the sidewalks when they finish a ride.

When you see a bunch of Birds blocking the sidewalk —  a flock of of five, for example, like in the photo above — the conclusion is that people renting them need to be instructed how to park them after a ride. Or reminded how not to park them, anyway.

Another concern people mentioned was about helmets.

Last week I talked with a couple who were riding the scooters on the Dave Clark Path, with proper bike helmets firmly in place, before they zoomed off at 10 mph. But I’ve also seen others, mostly young people, flying around downtown streets with their heads bare.

Because Oregon law does not require adults to wear helmets when riding bicycles, I initially doubted that helmets were required on scooters. But I was mistaken. When the scooters have motors, electric or otherwise, different rules apply.

Turns out there’s a statute (ORS 814.534)  that requires protective head gear for any person operating a “motor-assisted scooter on a highway or premises open to the public.”

Failure to do so is a traffic violation, and the presumptive fine is $25.

I doubt the Albany police have time to stop, let alone chase bareheaded scooters.  And if anyone does get a ticket for riding a Bird without a helmet, the law provides that if it’s the first time, the fine does not have to be imposed if the person can show the court “that the person has protective headgear” of an approved type.

Chances are the scooters will gain popularity during the spring and summer as the weather stays consistently dry. And as long as they don’t block the sidewalks when parked, there won’t be many complaints. (hh)


30 responses to “Bird scooters: Learn how and where to park”