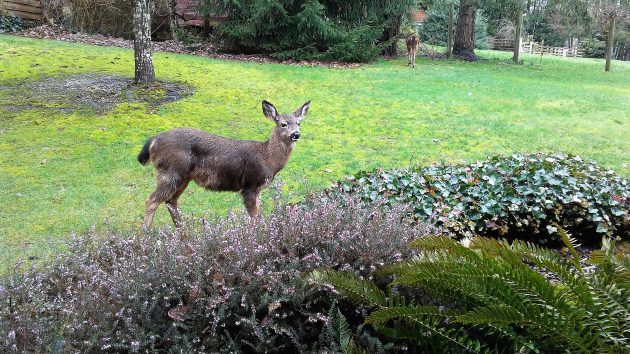 This little doe and her family wander past my window outside of Albany on most days, and seeing them reminds me of one legislator’s attempt to solve a couple of problems: Too many deer in some cities, and deer killed in traffic being left on the roads.

Problems with deer have been reported in Joseph, John Day, Ashland, and even parts of Portland. The animals mess up gardens, may spread disease, and sometimes gore pets and even terrorize people. The Albany paper recently carried a letter from Corvallis woman complaining about deer destroying her plants.

Senate Bill 373-A would authorize the state wildlife department to kill deer in cities that ask for deer control. The House Agriculture and Natural Resources Committee held a hearing on the bill on April 25. Members who expressed themselves, including Rep. Sherrie Sprenger, R-Scio, seemed to agree that deer can be a problem. But so far the committee has not acted.

The bill would authorize cities to pass an ordinance declaring they have a deer problem and to ask the Oregon Department of Fish and Wildlife for help. The department then could send in wildlife agents to take out deer to bring their number down. But first a city making the request would also have to ban the feeding of deer and possibly other wildlife.

Animals killed in such a campaign would be processed and the meat given to the Oregon Food Bank. Because of that, they could not be killed with poison darts. They would have to be shot. Sprenger wondered how this would work since cities usually ban the discharge of firearms. But Sen. Bill Hansell, R-Athena, the sponsor of the bill, said wildlife agents have the authority to shoot in cities.

Hansell also sponsored SB 372, which would allow people who hit and kill wildlife with a vehicle to salvage the animal and use the meat. If a deer is injured and incapacitated in a collision, the bill would authorize someone to “put it out of its misery,” in Hansell’s words. (He told the Ag committee he hoped he would not become known as Roadkill Bill.)

The Oregon State Police testified they are worried that the roadkill bill would open a loophole that poachers could exploit. If they’re stopped by a trooper with a deer or elk in the bed of their pickup, they could say they were on their way to get a salvage permit after hitting it. But that problem seems to have been solved in the 20 or so other states including Washington that already have roadkill-salvage laws.

The Senate passed both of Hansell’s bills, but as of Sunday the measures have not moved beyond the committee hearing in the House.

And as for the deer outside my window, they are in no danger from any urban hunting program. For one thing, they are smart enough to graze outside the city limits. But they might worry about speeding cars and about the cougar that people in North Albany say they have seen. (hh)